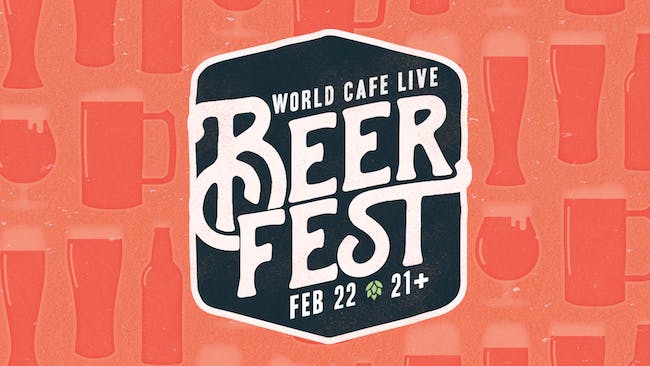 Join us for the 16th Annual World Cafe Live Beer Fest! We’ll be pouring seasonals, year-round offerings, and rarities from over 30 local, national, and international breweries throughout all three levels of the venue. Keep an eye out for old favorites and discover exciting new offerings. Plus, enjoy live music from Pepperwine and small plates from Executive Chef Rob Cottman. Don’t forget to head upstairs to The Lounge to spin the WCL prize wheel for your chance to win concert tickets, swag, and more. Save the date and stay tuned for more announcements!

Food and unlimited 3oz beer samples are included with your ticket. Some tables and chairs will be available, but seating is not guaranteed.

Don't drink and drive! World Cafe Live is conveniently located just two blocks from 30th Street Station, and on the route of several SEPTA bus lines, allowing you to enjoy sampling several beers without the worry of driving home afterward. $20 designated driver tickets will be on sale day of only at the box office.

Pepperwine is a female-fronted, four-piece band producing hip-shaking rhythms, soulful grooves, and funky jams. Every performance is a unique combination of genre-bending original tunes. On August 10, 2018 they released their first 11 song full length album "Bright Ideas" which is available on Spotify, iTunes, Soundcloud, and Youtube. Prior to this they released a 5 song EP entitled "Future Habits" in 2016. Pepperwine has been nominated for various Asbury Park Music Awards including Top Female Vocalist, Top Keyboard Player, and Top Groove Band. For more information head to www.pepperwinegroove.com