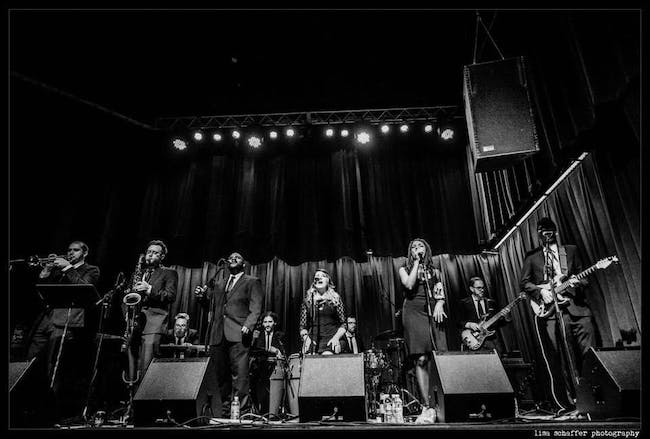 The York Street Hustle is back by popular demand and bringing their 8th annual Holiday Spectacular to World Cafe Live! Stomp your feet, shake your hips and catch the spirit of the season with a special mix of Motown holiday classics, 1960s soul hits and B-sides by Otis Redding, Darlene Love, The Temptations, Stevie Wonder, Aretha Franklin, Donny Hathaway, Gladys Knight, the Jackson 5 and many more. These local favorites keep the yule cool!

Each week, ten musicians arrive at a former South Philadelphia funeral home where, one by one, they unload their old tube amps and vintage gear. Once inside, the classic sounds of the 1960s are reinvigorated, reenergized and reborn. In a few short years the York Street Hustle has gone from playing tiny South Street bars to selling out major concert venues with a repertoire that spans more than a decade of Detroit, Memphis and Chicago soul. This is not your typical Motown band. Grit, sweat, and attention to detail have made The York Street Hustle the Northeast’s premier 10-piece 1960s soul tribute.

The York Street Hustle is: