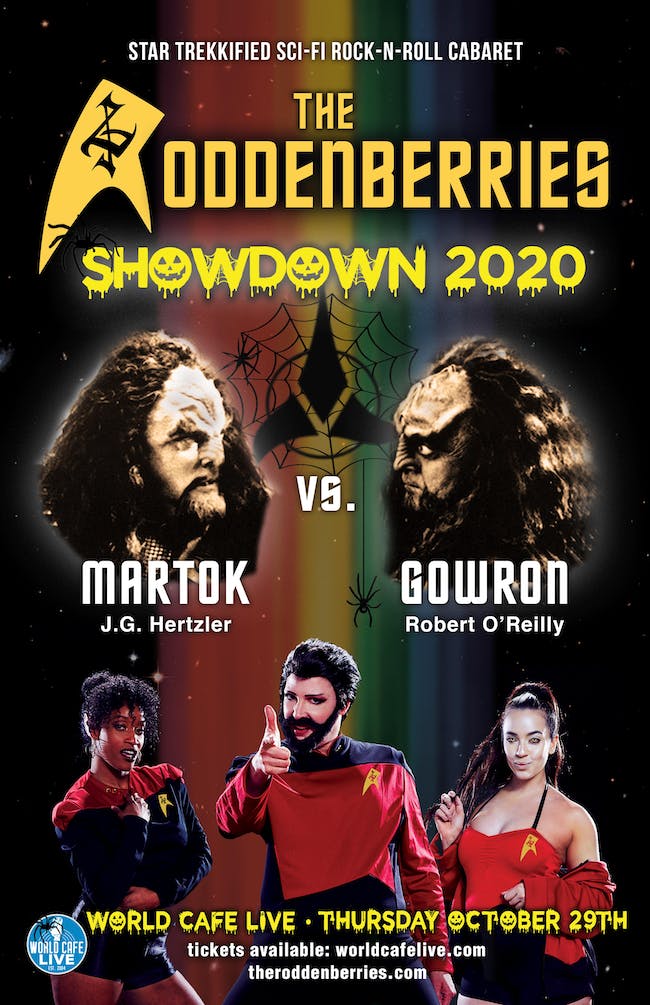 THIS EVENT HAS BEEN RESCHEDULED TO CANCELLED.

The Roddenberries’: Showdown 2020 will feature very special Star Trek guests Robert O’Reilly as the iconic Chancellor Gowron Star Trek: TNG and DS9, and J.G. Hertzler as Chancellor Martok of Star Trek: DS9 in a glorious and epic battle for Klingon Chancellor For Life! - make-up and prosthetics courtesy of legendary FX Makeup artist for Star Trek actors at conventions, John Paladin. The collaboration between The Roddenberries and Hertzler/O’Reilly is another milestone in the band’s ongoing commitment to uniting the diverse realm of Sci-Fi/Fantasy with a relatable rock-n-roll reality.

Showdown 2020 will also host some other sci-fi allies such as GaaaysInSpaaace, The Black Tribbles, and Priority One: A Roddenberry Star Trek Podcast in a veritable mini-Con. And prepare yourselves for some ghoulishly spooktastical treats, just in time for Halloween! Costumes / Uniforms welcome and encouraged!

The Roddenberries' versatile shows span the realms of Star Trek, Star Wars, science fiction, fantasy, gaming, Dr. Who, Marvel and DC in an effort to unite and entertain fans throughout the Nerd-o-Sphere. From artful recreations of movie and tv scores to pop/rock/classics parodies, this fun, energetic 10-piece troupe boldly goes where no Star Band has gone before in a unique spectacle of rock-n-roll theater, comedy, and pure sci-fi awesomeness!