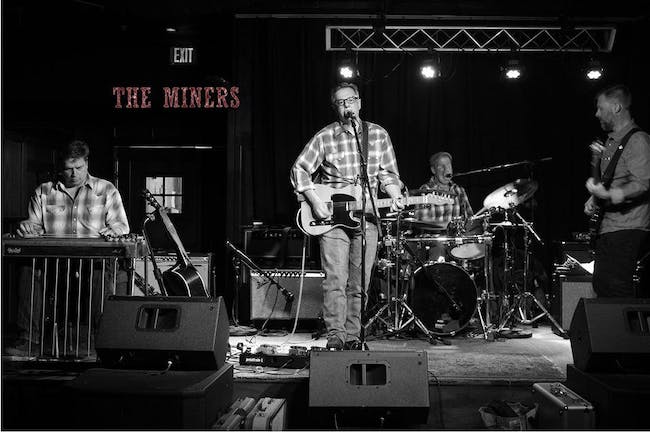 THIS EVENT HAS BEEN POSTPONED. NEW DATE TBD.

The Miners have begun work on their new full length album scheduled for late Spring/early Summer 2020 release on vinyl and digital formats, which will feature 10 Marlowe-penned originals. In September 2019, The Miners released their cover of Miller’s Cave, the Cowboy Jack Clement classic previously recorded by Gram Parsons, Bobby Bare, Hank Snow, Charlie Pride and Doug Sahm among others. The single has received airplay on radio stations and podcasts in the U.S. and the U.K. and has been reviewed by Americana focused blogs such as Adobe & Teardrops. The Miners debut six-song EP, Miner’s Rebellion, was released in November 2012 to critical acclaim and notable airplay including a featured write-up on No Depression, inclusion on Bill Frater’s Freight Train Boogie podcast, and praise from alt country/Americana blogs both in the U.S. and overseas (UK & Netherlands) where it was named a Top-10 release for 2013 by Adobe & Teardrops, was chosen as the #1 Debut Release of 2013 by the blog Popa’s Tunes, and a Best of 2013 by UK radio show Standing in the Shadows of Lev.

The Miners purposely limit their live shows to a half dozen or so per year at a variety of Philadelphia’s top venues including World Café Live (downstairs and upstairs), 118 North and MilkBoy Center City. For the past five years, The Miners have hosted a sold-out benefit at World Café Live (upstairs) raising money for breast cancer charities.