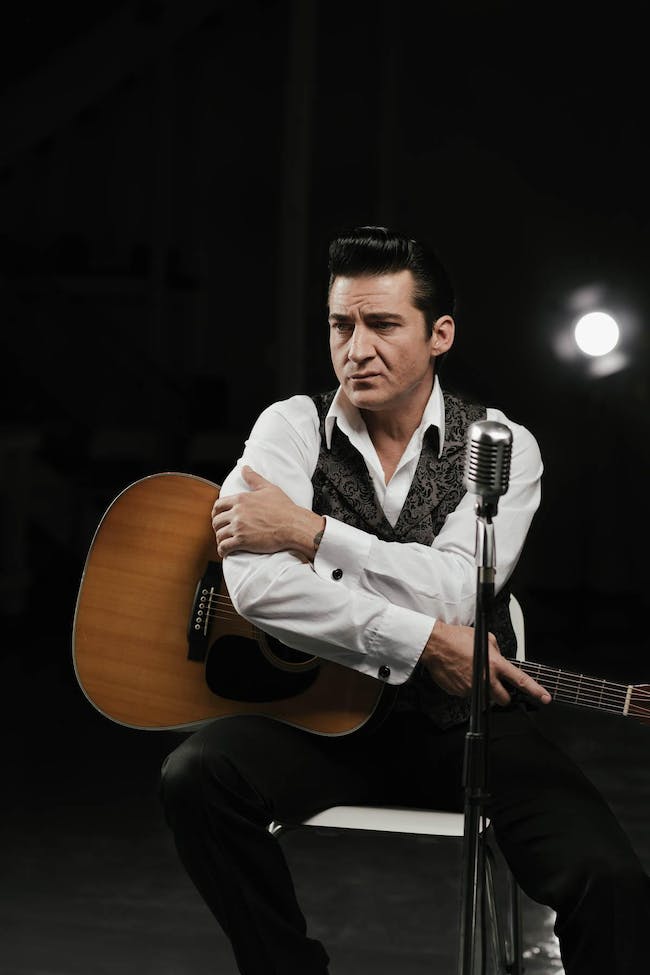 The Man in Black: A Tribute to Johnny Cash

The Man in Black : A Tribute to Johnny Cash

Born and raised in a working-class suburb of St. Louis, Shawn Barker took a schoolboy love for singing in church with his family and turned it into a career; a one-of-a-kind tribute to Johnny Cash, one of America’s greatest musical icons. Universally considered the pre-eminent Johnny Cash tribute artist, Barker has an uncanny resemblance to Cash. His strikingly similar looks, voice, and spot-on mannerisms revitalize the true character of Mr. Cash himself and have led Barker to an immensely successful career performing his tribute to the original “Man in Black.”

Barker’s path to his current success wasn’t a straight line from gospel choir. After serving his country in the Army, Barker came home to Missouri, took a job as a carpenter, and spent all of his free time learning to play the guitar. He developed strength and versatility in his voice by modeling his crooning on a cast of American legends- Johnny Cash, Elvis Presley, Roy Orbison, Buddy Holly, and Gene Vincent. His performances quickly turned from hobby to profession, but oddly enough, Barker’s first touring gigs were portraying Elvis, not Johnny Cash. Everything changed, however, when Barker was asked to audition for the part of Cash in a Hollywood production, as it became evident to the director and Barker himself that Johnny Cash was his true calling. From that point on, there was no turning back.

Shawn Barker’s first Man in Black show was held in 2004 at a casino in Niagara Falls and hasn’t stopped since. Barker performs close to one hundred shows each year, regularly playing Las Vegas and coast to coast throughout North America, as well as stints in Europe and Australia. Due to a tremendous response in Quebec, Barker spent six summers delivering his show five nights at week at the Capitole de Quebec, selling over 300,000 tickets.

Having toured nationally and internationally for over a decade, Barker has delivered his one-of-a-kind show in 12 countries, performed over 1,000 shows, and sold more than half-a-million tickets over the course of his career. In addition to his own show, Barker has been invited to perform as Johnny Cash in “One Night in Memphis,” a four-part tribute show showcasing the major recording artists of Sun Records: Elvis, Cash, Jerry Lee Lewis, and Carl Perkins. He also regularly appears in the Legends in Concert series, known as the pioneer of live tribute shows and having celebrated 35 years of entertaining more than 30 million fans around the globe.

With his striking resemblance, spot on mannerisms and baritone voice, Shawn Barker embodies the character and spirit of Johnny Cash.

Shawn Barker’s Tribute to Johnny Cash is an accurate and energetic recreation of an American music icon. Whether it’s the full theater show with a professional band, the female singing group, The Sugarbelles, paying tribute to the Carter Sisters and Jessica Morales singing as June Carter. Or the raw, stripped down three-piece retro group, The Folsom Prison Blues Boys, the shows are bringing the legend back to life onstage for the fans of today and the next generation.