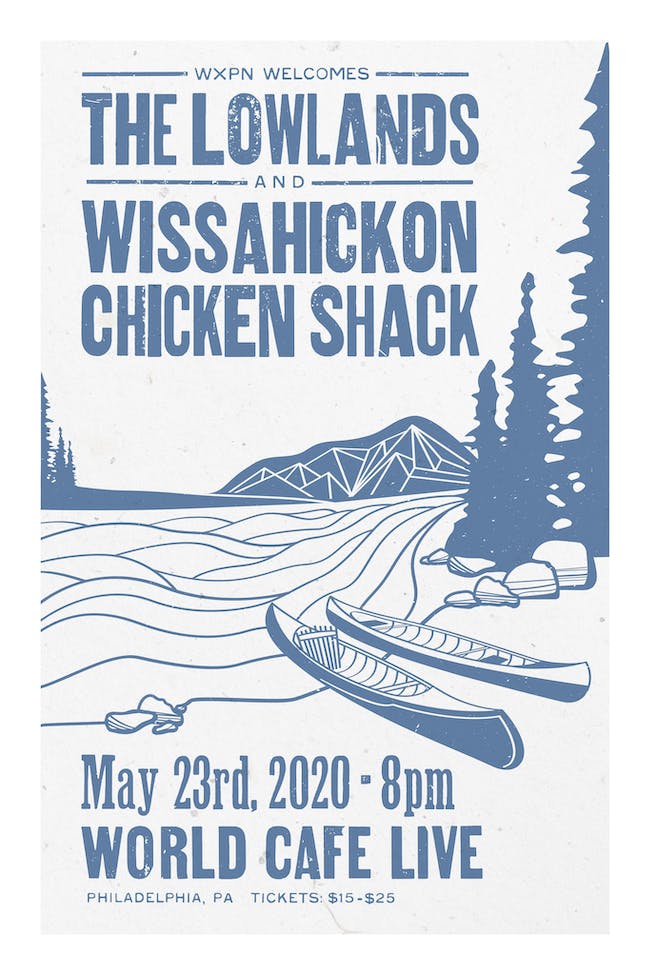 The Lowlands came together in the early 2000’s and after two successful record releases, toured the East Coast with some of the bluegrass/folk genres finest acts. They are excited to return to The World Cafe Live to revive these songs and reconnect with their loyal fan base.

The Philadelphia-based Wissahickon Chicken Shack was born in 2006, when a Craigslist ad connected seven musicians who were from a diverse variety of backgrounds but shared an affinity for Gram Parsons and Gillian Welch. Together, they seamlessly fused a variety of folk, rock, country, and bluegrass influences into a musical landscape reflective of the breadth and depth of the American experience. During any given performance the band could travel through the high and lonesome sounds of Appalachia, southwest through the funk of New Orleans, west on I-10 through the honky-tonk of Texas, then up the west coast to the bay area for a hat tip to the Haight…with detours through various unmapped musical territories along the way.

For four years, the Chicken Shack built up a devoted following, playing in venues such as the Philly Folk Fest, World Cafe Live, Tin Angel, the Sellersville Theater, Chaplins, the Mermaid Inn, Ludwigs Garten, etc… The past ten years have scattered the band members on musical and geographical winds; they have toured the country with GTLO, with Chris Kasper, raised children, got married, recorded solo records, and settled in Wyoming. After such a long hiatus, they are delighted to reunite for this special show.

The Wissahickon Chicken Shack is: Jack Byers on the acoustic and electric guitar, Phil D’Agostino on the electric and double bass, Brad Hinton on guitar, lap steel and dobro, Bethany Danel Brooks on keys, Gary Lebiedzinski on drums, David Lacy on banjo, and Kiley Ryan on the fiddle. Byers, Hinton, and Danel Brooks share song-writing credits and vocals.