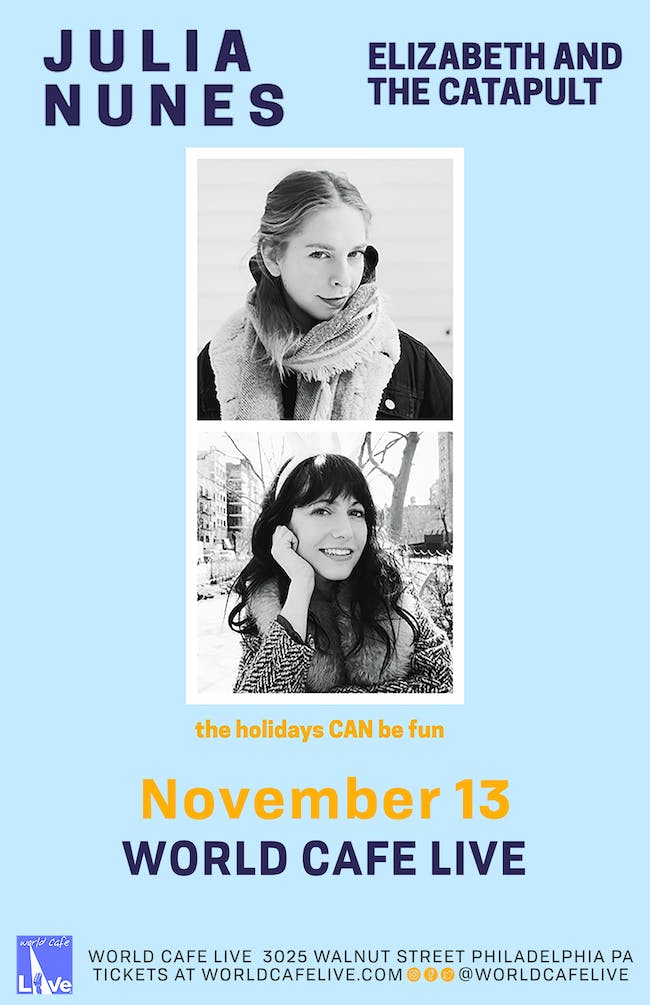 Elizabeth and the Catapult

Elizabeth and the Catapult

Elizabeth Ziman, who performs as Elizabeth and the Catapult, is a critically acclaimed singer/songwriter from New York, living and working in Brooklyn. She's toured with the likes of Sara Bareilles and Kishi Bashi; collaborated with Esperanza Spalding, Gillian Welch, Blake Mills and Ben Folds; scored, with Paul Brill, a variety of international award-winning documentaries including "Trapped," a Peabody winner; and won An Independent Music Award for Songwriting, Folk category. Her songs have been featured in national television campaigns for Google, Amazon, Sky TV, and "So You Think You Can Dance". Always writing, Elizabeth has narrowed her vast collection of previously unrecorded material down to her fourth full-length studio album "Keepsake," produced by Dan Molad (Lucius) and featuring collaborations with Richard Swift (The Shins).

Singer/songwriter Julia Nunes is relentlessly personal. That, plus her powerhouse cello-like voice and thought provoking lyricism is how she garnered a loyal and long standing following that has carried her from playing the ukulele on YouTube to dropping an album on Conan. From YouTube covers to sold-out house shows, Julia has captured the hearts of countless fans worldwide, who have been patiently awaiting her new release, UGHWOW. In Julia’s own words: UGHWOW is a consistent line in my internal monologue, it’s frustration or exhilaration or contentment or sorrow or surprise depending on the day. The last few years have been very UGHWOW and this record is a pretty good encapsulation.She’s toured with Ben Folds, A Great Big World, The Mowgli’s, Ben Kweller, performed with Weezer at Bonnaroo, and spoken at major music conferences MIDEM, SXSW, and FORM Arcosanti on her modern approach to independent artistry. Julia’s much anticipated album “UGHWOW” is out now. She strums the ukulele a total of 3 times on this record and still evokes the extreme tenderness of her acoustic beginnings.