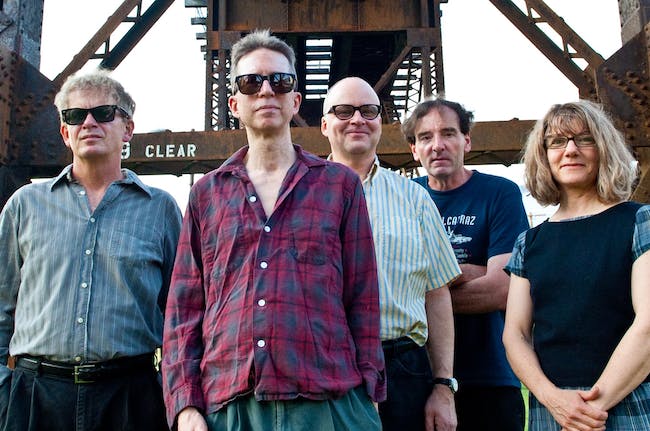 The Feelies perform their first two albums, Crazy Rhythms and The Good Earth as well as other favorites.

Crazy Rhythms is The Feelies debut album, released in 1980. Initially it was an import only on the legendary Stiff Records label out of the UK. The Guardian referred to Crazy Rhythms as ""one of those albums during whose course you hear the most exciting sound in music: things changing." The long player includes such longtime Feelies faves as "The Boy With The Perpetual Nervousness" and "Fa Cé-La". Another highlight is the band's frenetic version of "Everybody's Got Something To Hide (Except Me and My Monkey) from The Beatles' White Album.It took six years for the follow-up record to be released. The Good Earth came out on Coyote Records in 1986. It was produced by band members Bill Million and Glenn Mercer as well as REM's Peter Buck. REM always acknowledged a musical debt to The Feelies so the pairing was a natural. "Slipping (Into Something)" and "Let's Go" are among the enduring tracks found here. In 2009 The Good Earth was reissued by Bar None in The States and Domino Records in the UK.In 2009 The Good Earth and Crazy Rhythms were reissued by Bar None in The States and Domino Records in the UK.

Formed in Haledon NJ in 1976, The Feelies released 4 albums- including their critically acclaimed and influential debut Crazy Rhythms, which was voted 49 in the top 100 albums of the 1980s by Rolling Stone magazine and chosen by Spin Magazine as 49 of the best alternative records of all time. Supporting the release of their first four albums the band appeared on the The Late Show With David Letterman and in concerts with The Patti Smith Group, REM, and Bob Dylan as well as touring with Lou Reed. The twin-guitar attack of songwriters and founders Glenn Mercer and Bill Million is the infectious sound of the group. Paired with driving drums and percussion, it has left an indelible mark on the landscape of rock and roll.

In 2008, the Feelies re-united to open for long time admirers Sonic Youth at Battery Park and then resurrected their tradition of playing low key gigs at strategic intervals throughout the year rather than doing lengthy tours. In 2009 Bar/None re-issued Crazy Rhythms and The Good Earth, this being the first band-sanctioned CD release of the former. In 2011, they released a new studio album Here Before.

In March 2016, Bar/None Records re-released the third and fourth albums, Only Life and Time for a Witness. As a special Record Store Day release Bar None/Coyote Records will co-release the Feelies Uncovered. This will be a limited edition 12 “ EP featuring studio recordings of four cover songs, none commercially available before. In addition, the Feelies recently wrapped up work on a brand new studio album, expected to be released later this year.

They continue to regularly perform live. Their music has been featured in the films Married to the Mob, Something Wild, Prelude to a Kiss, The Truth About Charlie, The Squid & the Whale and Ricki and the Flash.