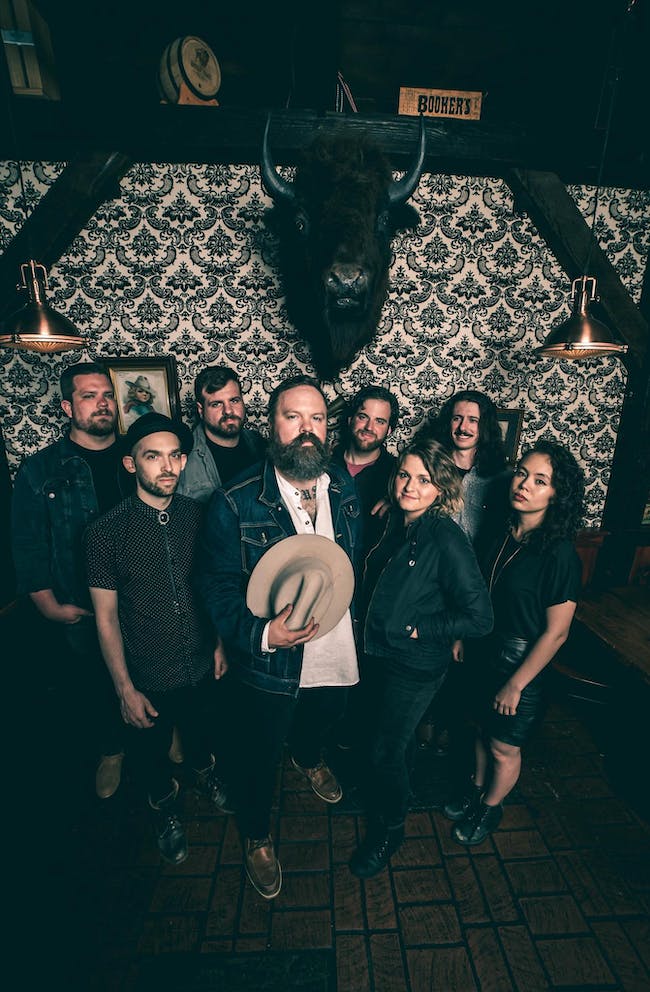 Facebook
Twitter
Email
The Commonheart with The Right Fiction appearing at The Lounge at World Cafe Live in Philadelphia, PA – Tickets Available

“This band is therapy for me to bring myself back to being a better person, and I hope people come along with me,” says powerhouse singer Clinton Clegg of The Commonheart. The testimonial begins on August 16th when the 9-piece band issues its most potent and purposeful dose of grittily redemptive rock n’ soul, its sophomore album, 'Pressure' (Jullian Records).

Clinton didn’t grow up in a Baptist church, and his soul machine of a band isn’t pushing religion. Live and in the studio, the Pittsburgh-based collective is offering feel-good positivity, Golden Rule messaging, and sweat-soaked performances that nimbly ease through blues, vintage soul, and rock.

The nonet is bonded by familial-like ties and a desire to foster spiritual uplift. Among its ranks are female backup singers, drums, bass, guitar, a horn section, and keyboards. Out front is Clinton, a lightning bolt charismatic front man with dynamically expressive pipes that effortlessly traverse bluesy pleading, and honeyed balladeering.

The Commonheart’s latest album, 'Pressure,' is both rugged and refined. The 10-song album showcases raw-nerve soul musicianship pristinely recorded. It's an album by a band on a mission. “We are willing to take risks and to go at any lengths for this band,” Clinton says affirmatively. “We are ready to spread positivity and make a stretch of this thing.”

The Right Fiction is a new band from Philadelphia, PA started in 2019, but the real origins go back much much further. In fact, the precise day goes all the way back to June 3, 1972. That’s the date when Stevie Wonder joined The Rolling Stones’ roadshow as an opening act at the Pacific Coliseum in Vancouver. The Rolling Stones’ 1972 tour was a much-publicized and much-written-about concert tour of the United States and Canada in June and July of that year. The tour supported the group's Exile on Main St. album, which was released a few weeks earlier on 12 May. Stevie Wonder joined the tour after releasing the first album of his “classic period” called Music of My Mind in March of that year.

The band - Adam Zielinski, Brendan McGeehan, and Aaron Brown - are all music nerds who love to read music bios, listen to old artist interviews, and have an almost unrivaled collection of vinyl records. After one particular discussion on how crazy it was for Stevie Wonder to join the 1972 Rolling Stones Tour, especially at that particular time in their careers, the question was posed - “what would it sound like if at the end of that tour they decided to make a record together? The Rolling Stones’ band was on fire at that time and Stevie’s vocals and music were reaching new heights, so it seemed like a great question to pose

Instead of just thinking about it and moving on, the three members of the band decided to take those elements, along with a dash of The Beatles, and put their ideas into practice with The Right Fiction. Says Adam Zielinksi - “It’s been a really exciting journey to merge these distinct influences into one cohesive sound - the hard rock, the blues, the soul, the country - it’s been incredibly exciting and rewarding.” The trio is currently in the studio putting the final touches on what is now becoming the unique “right fiction” sound and is very excited to share it with the public to see if their experiment in blending The Rolling Stones/Stevie Wonder 1972 tour into a cohesive sound is as rewarding as their very first discussion which sparked their curiosity to explore this crazy “what if” scenario in the first place.