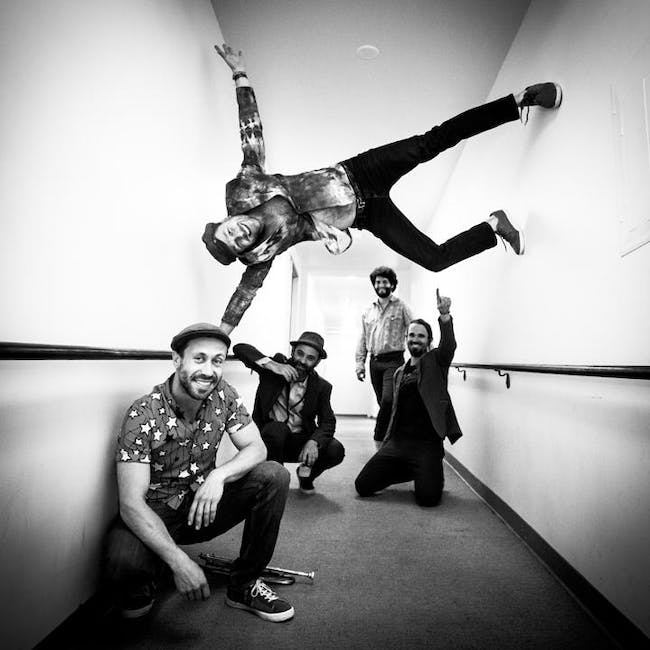 The California Honeydrops celebrate their 10th year together with the release of their 7th studio album and first ever double album, “Call It Home: Vol. 1 & 2” and continue to perform worldwide. Led by dynamic vocalist and multi-instrumentalist Lech Wierzynski, and drawing on diverse musical influences from Bay Area R&B, funk, Southern soul, Delta blues, and New Orleans second-line, the Honeydrops bring vibrant energy and infectious dance-party vibes to their shows. In 2016 & 2017 the Honeydrops were honored to support Bonnie Raitt on her North America release tour—and in the past have been privileged to support the likes of B.B. King, Allen Toussaint, Buddy Guy, and Dr. John. Whether in those high-profile performances or in more intimate venues where the band itself can leave the stage and get down on the dance floor, the California Honeydrops’ shared vision and purpose remain: to make the audience dance and sing.

The Honeydrops have come a long way since guitarist and trumpeter Lech Wierzynkski and drummer Ben Malament started busking in an Oakland subway station, but the band has stayed true to that organic, street-level feel. Listening to Lech sing, it can be a surprise that he was born in Warsaw, Poland, and raised by Polish political refugees. He learned his vocal stylings from contraband American recordings of Sam Cooke, Ray Charles, and Louis Armstrong, and later at Oberlin College and on the club circuit in Oakland, California. With the additions of Johnny Bones on tenor sax and clarinet, Lorenzo Loera on keyboards, and Beau Bradbury on bass, they’ve built a powerful full-band sound to support Wierzynski’s vocals. More like parties than traditional concerts, their shows feature extensive off-stage jamming and crowd interaction. “The whole point is to erase the boundaries between the crowd and us,” Wierzynski says. “We don’t make setlists. We want requests. We want crowd involvement, to make people become a part of the whole thing by dancing along, singing, picking the songs and generally coming out of their shells.”

Renowned for his eloquent Americana style, engaging live shows, and off-the-cuff clever observations, John Craigie carries on the legacy of classic singer-songwriters, while blazing a trail of his own.

Recently, that trail twisted and turned into new territory for the Portland, OR performer who The Stranger appropriately dubbed, “the lovechild of John Prine and Mitch Hedberg.” His music speaks loud to both audiences and fellow artists. Todd Snider notably hand-delivered a gift on-stage, and Chuck Norris has sent fan mail. His fifth full-length album, No Rain, No Rose boasted two collaborations with Gregory Alan Isakov, namely “Highway Blood” and “I Am California.” The latter quickly cracked 200K Spotify streams and counting, as his knack for a captivating narrative and rustic aural palettes powered the 13-track offering together.

“It’s about transparency,” he explains. “The storytelling enables listeners to relate. Really good music doesn’t make you feel good; it makes you feel like you’re not alone.”

As No Rain, No Rose landed, he caught the attention of none other than Jack Johnson. Through a serendipitous series of events, Craigie’s 2016 live effort Capricorn in Retrograde… Just Kidding… Live in Portland landed in Johnson’s car stereo during a California coastal road trip.

Shortly after, Jack reached out and Craigie soon found himself onstage for 12 shows during Johnson’s 2017 summer tour including performances at The Greek Theatre in Berkeley, California and The Gorge in Washington state. Along the way, he earned acclaim from SF Weekly, Seattle Times, AXS, and more. Festival appearances also include Oregon Country Fair, Kate Wolf Music Festival, High Sierra Music Festival, Burning Man, and many others.

When Craigie plays, it’s one of those special shows that can make you laugh and cry in the same song. It’s a musical journey that can’t be denied.