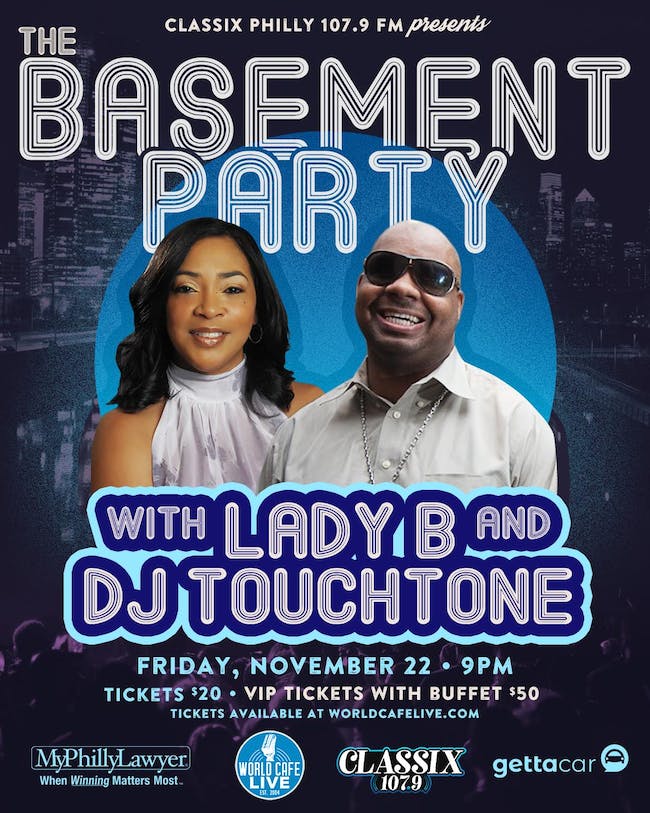 The Basement Party with Lady B and DJ TouchTone

Lady B is bringing her Basement Party back to World Cafe Live on Friday, November 22nd! Come dressed to impress and party with Lady B and DJ Touchtone playing all of your favorite hits. Come party with the legends of old school and boogie down with a Blue Light's Soul Train line and Blue Light's slow jams all night long after the special live broadcast. The first 50 guests will receive a Classix swag bag. There will be some of your favorite Lady B games including 70's Soul trivia for your chance to win prizes like concert tickets and $500! Yes, one lucky attendee will leave the party having danced the night away to Classic R&B AND will be $500 richer! Lady B and DJ Touchtone throw the best Basement Parties around. This is one you don't want to miss!

Our VIPs will enjoy an exclusive section overlooking the dance floor with seating, a private bar, and a complimentary buffet. We have a very limited amount of VIP tickets available - so get them while you can!

Wendy Clark, better known by her stage name Lady B, is an American rapper and radio DJ from Philadelphia, Pennsylvania. She is one of the earliest female rappers in hip hop, and one of the first to record a single. She began her career with radio station WHAT in 1979, and recorded her first single later that year, "To the Beat Y'all". The song, the title of which became a stock rap phrase, was first released by TEC, a local Philadelphia-based record label, and released again in 1980 by Sugar Hill Records. She is recognized as one of the first DJs to play rap records on the radio outside New York, playing artists such as Will Smith and Soulsonic Force at the start of their careers. In 1984, Lady B moved to Philadelphia's Power 99 FM and started the program The Street Beat, which ran until 1989. In 2002 she received the "Philly Urban Legend Award".She later broadcast for Sirius Satellite Radio in New York City. She also worked for WRNB 100.3 in Philadelphia until December 2017.

The world's #1 blind DJ. DJ Touchtone has a distinctive characteristic that sets him a step above the rest. He is continuously exceeding the world’s expectations and overcoming many unknown obstacles. DJ Touchtone is now taking his career to a global level; determined to “Touch” all as he stimulates senses and encourages everyone to feel the beat!