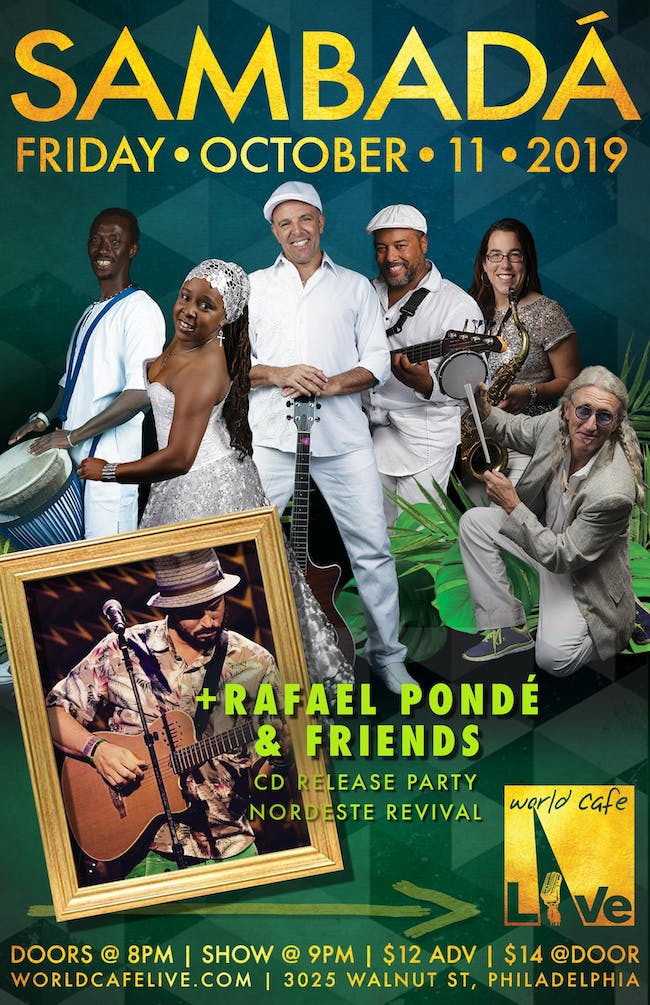 While Brazilian natives Papiba Godinho and Dandha da Hora bring their profound knowledge and respect for the roots of Afro-Brazilian song and dance, the entire band has developed a type of samba-reggae-funk with a universal appeal. SambaDá musically unites the Americas and Africa, drawing from percussion based styles of South and Central America and Senegal, and blends it with that good old funk, rock and reggae backbeat so familiar to crowds of North America.

For over 20 years, SambaDá has been mixing contemporary sounds with the roots of Brazilian culture. Papiba is a master of Capoeira, an Afro Brazilian martial art form created by Brazilian slaves, which draws on music and acrobatic movements. Dandha was born into the rich Afro Brazilian traditions of Salvador, Bahia and the Carnival Group Ile Aiye, and started her dancing career at age 6. Ile Aiye has been in the forefront of Civil Rights in Brazil, promoting equality and justice, and is widely recognized as the first Afro Brazilian BLOCO or group to perform in Brazil's notorious Carnival celebrations.

The other members of SambaDá come from a wide range of cultures, styles, generations and sensibilities. Minnesota native Gary Kehoe brings a depth of decades of experience with a wide range of playing styles from Caribbean to bluegrass, rock, funk and more. Hailing from Brooklyn New York, bassist and vocalist, Etienne Franc, also known as KostarOne and roKsta OrKestra has been performing locally and internationally for the past 20 years, as, bassist, guitarist, singer and Rapper. Playing saxophone, flute, clarinet, percussion, and on vocals, California girl, Anne Stafford, pursued jazz & cultural studies in college and has infused SambaDá with her soulful and expressive playing and her passion for jazz, hip-hop, R&B, gospel and Brazilian music. Percussion Ibrahima (Ibou) N’gom was born into a Griot family of traditional musicians in Senegal , West Africa. He has been carrying on his family’s musical lineage since childhood. Ibrahima toured with two prominent Senegalese dance companies, the 2nd National Ballet of Senegal and the Ballet Sinomew before coming to the United States 20 years ago.

What unites this band from such diverse backgrounds is a magic that can be felt by both the band and the audience. SambaDá brings joy to each performance, and keeps their fans asking for more!!