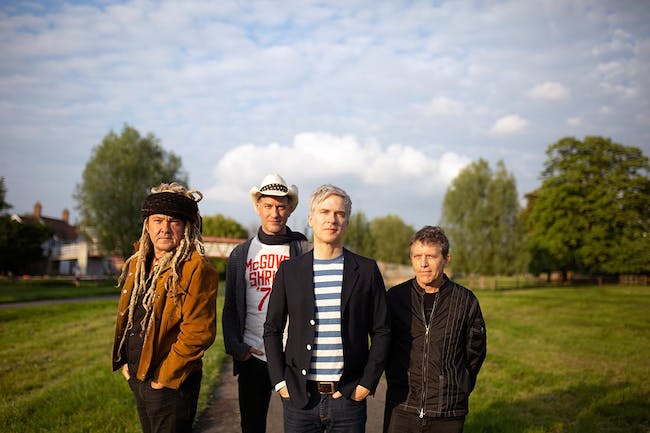 With their ninth studio album, Nada Surf—Matthew Caws, Daniel Lorca, Ira Elliot, and their longtime friend and collaborator Louie Lino—continue pursuing their humanistic vision of the world through hooky, catchy rock songs with sharply drawn, yet tenderly felt lyrics. Never Not Together, out on TK DATE, is a wide-ranging collection of songs that revel in the group's ability to evoke and reflect grand and intricately wrought emotions, whether through sweeping guitar solos or hushed-whisper vocals.

"Empathy is good, lack of empathy is bad, holy math says we're never not together," Caws declares at the end of "Something I Should Do," a crashing powerpop track with an insistent melody that adds urgency to his thoughts about 21st-century life. The concept of "holy math" which informs that line—and the album's title—was inspired by a Justin Vernon appearance on the Song Exploder podcast, where the Bon Iver leader talked about the interconnectedness of humans. "We're all together, and that's just the way it is, and the way it always will be," says Caws. "That's the sacred truth of it."

That idea of being linked and searching for connection is a common theme of the album's lyrics, which depict people hunting down answers by peering within and reaching outward. "Looking For You," which opens with a spectral choir and blossoms into a rock spectacle with crashing strings and two guitar solos—one played by Caws, the other by frequent Nada Surf collaborator Doug Gillard—seeks solace in doctor's visits and grand metaphors. "So Much Love," which Caws wrote as part of Hits president Karen Glauber's annual SXSW session, is a driving, yet kind-hearted reminder that love and connection are in the air—even if, in the immediate, it's lurking in the mists of one's sent-messages mailbox. "Mathilda," meanwhile, shifts time signatures as it switches perspectives on a childhood spent apart from the crowd, mulling over what "masculinity" meant even at a young age.

Youth is also a topic on "Just Wait," a shimmering midtempo song tethered to earth by a fluid bassline. "I wrote 'Just Wait' on a writing trip to Nashville," recalls Caws. During a session with songwriter Gavin Slate, the two got to talking about the current state of youth culture. "I remember how being an adolescent was so scary—just as it would be for everybody," he says. "You're starting to feel like an adult, but you kind of don't want to be; you're kind of not ready, but you kind of can't wait. It's that kind of fright-delight, like September at school." The end result is empathic and warm, its chiming guitars and background "ooh-oohs" offering a refuge from the pressure to keep up appearances in "love and work and where you live," as Caws sings on the song's bridge.

In 2017, Nada Surf celebrated the 15th anniversary of their 2002 breakthrough Let Go, an experience that energized the early planning of Never Not Together. "I made pretty elaborate demos for the songs—something I've never done before," says Caws. "I think [the Let Go tour] really boosted my work ethic and made me feel like I really had to go for it."

Never Not Together was recorded at Rockfield Studios in Wales, where artists like Echo & the Bunnymen, the Flamin' Groovies, Iggy Pop and Oasis recorded albums. "I've been seeing the name on albums for so long," says Caws. "It's a working farm, and the founder/owner, Kingsley Ward, would come in and tell us stories when he wasn't farming. I'd walk into town every morning and listen to the sheep talking as I walked by them."

That openness to listening—to their fans, to each other, to the world—has helped inform Nada Surf's legacy as down-to-earth rock stars—musicians who can command festival stages around the world while connecting to audience members on a personal level, conscious of the shared humanity every step of the way.

Most people know Aaron Lee Tasjan as one of the wittiest, most offbeat, brilliant, weed-smokin’ & LSD microdosin’ Americana troubadours writing and singing songs today. And the New York Times, NPR and Rolling Stone will all gladly corroborate. But steel yourselves, folk fans, because he’s about to follow his restless muse straight out from under the weight of everyone’s expectations into the kind of glammy, jingle-jangle power-pop- and- psych-tinged sounds he hasn’t dabbled in since his younger days playing lead guitar for a late-period incarnation of The New York Dolls.

Really, the roots of Tasjan’s new record, Karma for Cheap, stretch even deeper, drinking up the sounds of a Southern California childhood spent listening to The Beatles while riding around with his mom at the wheel of their navy blue Volvo station wagon—back to the very first pre-teen year he picked up a six-string and started figuring out all the pretty little chords in those Lennon-McCartney tunes. Back to the pure, blissful unfiltered innocence of falling in love with music for the first time. But more on that later. First, let’s ponder the brutish realities of the American Swamp.

Aaron Lee Tasjan says he aims to use his music for good, but he’s no protest singer. And Karma for Cheap isn’t some heavy-handed, didactic political record cramming a set of talking points down anyone’s throat. It’s a finely tuned rock & roll seismograph measuring the dark and uncertain vibrations of the time in which it was created. A cracked mirror reflecting back the American zeitgeist in this foul year of Our Lord, Two Thousand and Eighteen.

“When you’re a songwriter,” Tasjan says, you’re dealing in truths and untruths—that’s part of your commerce as a citizen of the world. And anything coming along that’s threatening to blur that line is a threat to your livelihood as a working American.”

Take it from Tasjan and Karma for Cheap, being a songwriter in the post-truth world of Trump’s America ain’t easy. Tasjan valiantly wrestles with this new normal in songs like “Set You Free” (“it’s a smokescreen scene and nobody knows what’s real”—fake news!) and “The Truth Is So Hard to Believe.” What will we do when we can no longer map the line between fact and fiction? When we exist in a world where the truth is unknowable and we’re at the mercy of liars and charlatans? “Hearts in chains and hands are off the wheel,” Tasjan sings in hypnotic staccato, tapping the collective cultural anxiety of all the rattled millions drifting off each night to a new American dream, one in which we’re all in a big red, white and blue camaro fishtailing down some winding tree-lined road in the bible-black dark, white-knuckle-clutching the oh-shit bar, accelerator glued to the floor and not a soul in the driver’s seat.

“The sound of this new record is a little more rough and ready, more raw than anything I’ve done before,” Tasjan says. “Seems like a good time for it. We’re living in a pretty raw feed right now, and a lot of these new songs reflect that. They deal with with being stuck in the deluge of horseshit every day. On social media, you see people suckered into getting all irate over some post that, in the end, turns out to be completely fake. We have to be aware of these mindsets, these traps and emotional pitfalls that send us spinning. Music for me is a comfort thing. And I’m trying to sing about all this to remind myself not to get caught up in the game. There are a lot of people out there carrying the burden of this weird, twisted world we’re living in at the moment on their shoulders. So I tried to write a record that offers some comfort, encouragement and hope to those people, as much as it’s possible to be hopeful right now.”

While the stylistic shift from Tasjan’s palpably stoned ‘70s-country-channeling 2015 debut, In the Blazes, to his more sophisticated, introspective and lushly produced 2016 follow-up, Silver Tears, was relatively incremental, Karma’s rocked-up Brit-pop-influenced Beatles-Bowie-Badfinger vibes underscore a significant departure. The album boldly reminagines these vintage sounds, pushing the boundary of what can be considered Americana. With Karma, Tasjan establishes himself as an artist who not only evolves over time, but isn’t afraid to risk reinventing himself completely from one record to the next.