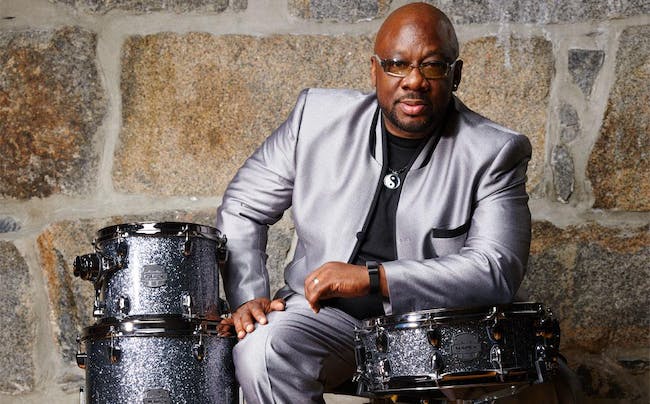 A reunion and tribute to a true jazz icon. Art Blakey's Jazz Messengers was a quintessential band for nearly 40 years, with a constant influx of only the best young musicians. Now, multiple generations of the group's elite alumni come together to commemorate the 100th anniversary of Blakey's birth and the legacy he created by providing a life-changing apprenticeship for over 200 jazz musicians. With band members Bobby Watson, Essiet Essiet, Brian Lynch, Bill Pierce and Zaccai Curtis, this top-notch ensemble is led by Ralph Peterson, the only drummer ever to play in the band alongside the drum maestro himself.

The Messenger Legacy is an elite line-up of alumni members of one of Jazz’ most influential bands, Art Blakey’s Jazz Messengers.

The current configuration is Bobby Watson, Essiet Essiet, Geoff Keezer, Brian Lynch, Bill Pierce and at the drums, the last drummer chosen by Art Blakey to play at his side in the Jazz Messenger 2 Drummer Big Band Ralph Peterson. Bobby Watson and Bill Pierce were present the night Peterson first sat in with the band at Mikell’s and was a mainstay from the late 70’s through the early mid 80’s. Essiet Essiet was brought to Art Blakey by recommendations of Ralph Peterson and Bobby Watrson. Geoff Keezer and Brian Lynch joined what turned out to be the last edition of The Messengers before Art Blakey’s passing.

Arguably, no other drummer is more qualified than Peterson to lead a band with such depth. Thirty years ago, Peterson, then a fresh-faced 21-year-old chosen to play by Blakey as a Messenger in the 1983 version of The Jazz Messenger two drummer Big Band and learned firsthand from Buhaina himself. Peterson remained the 2nd drummer in the Big Band until Blakey’s passing. Depending on availability other Jazz Messenger who have done and would be available would include Donald Harrison, Craig Handy, Robin Eubanks, Kuumba Frank Lacy, Phillip Harper, Johnny O’neal, Donald Brown and sometimes even Reggie Workman who joined Art in 1962 the year Peterson was born. Mr Workman also played in the inagural Messenger Legacy concert.

This group of musicians wishes to preserve, protect and honor the legacy of a man who was much more than a bandleader to all of them. This group has the potential of launching renewed appreciation for one of the most important institutions of apprenticeship in American music history. Said Peterson about forming the group, “Every time I play the drums it is in tribute to Art, but I wanted to do something that goes beyond me, beyond any individual. I wanted to pay tribute in a way that was authentic, genuine, and meaningful not just to a few, but to every person he touched through his music.” In an age when cover bands and tribute acts are commonplace and contrived, this proves to be the exception. “Having multiple generations of Messengers represented in this band, this is the closest you can get to the source,” said Peterson through his raspy chuckle, “This is the real deal.”