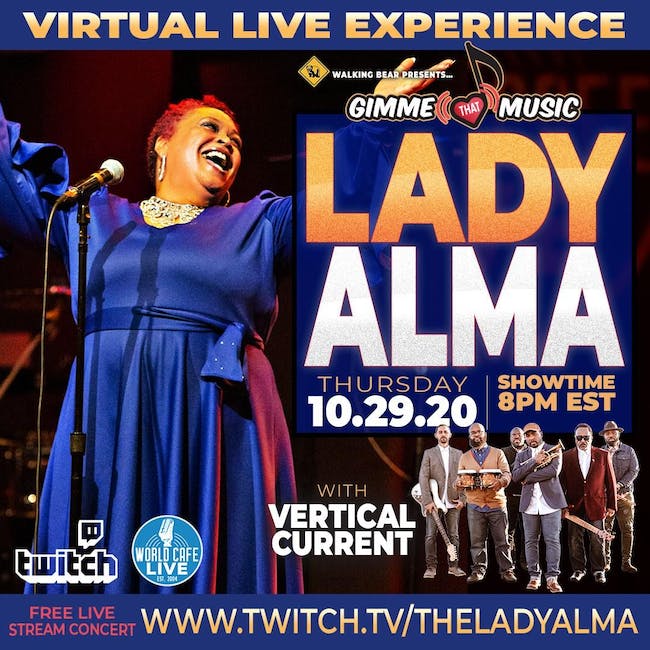 We hope you'll consider making an advance donation with your RSVP to help support independent venues like World Cafe Live and independent artists like Lady Alma! Donations will go towards covering venue production and artist costs so we can present this high quality livestream to you for free.

RSVP to receive a reminder email with the stream link before the performance. RSVPs are not required - the Twitch Livestream will be free and open to all.

Her track “Let It Fall”, made a resurgence in 2018 when the song went viral via Facebook with over 30 million views (video of a fan seen dancing and lip-syncing to the song in Johannesburg, Gauteng South Africa). Not long after, another video of legendary choreographer Toni Basil, dancing to “It’s House Music”, went viral with over 5 million views on Twitter, and was also seen on Inside Edition. The demand for LADY ALMA’s infectious groove went off the charts. Her single “Glory & Honor” (produced by Darryl James) was released in March 2018, and quickly followed by “A Time And A Place” with producer/DJ Ralf GUM, which was released in June 2018 on GOGO Music. Also, in 2018, LADY ALMA was recognized by Traxsource as “Best of 2018” including: “2 Top 10s”, “16 Top 100 spins” and “60 features in DJ Top 10 Charts” to name a few.

She plans to carry this momentum throughout 2020 and beyond, with an upcoming re-release of the 2015 track "Your Time To Shine" (Wipe The Needle Remix) by Sol Brown featuring Lady Alma via Makin Moves Records. LADY ALMA’s fam can also look forward to her newest single, “All The Way Far Away" produced by Rob Paine and David Marston scheduled for release in August 2020, with more new tracks with features from the likes of Rich Medina, DJ Miza and Present Tense coming later in 2020.

Whether you’re in Toronto, Japan, Berlin, London, Paris, Johannesburg, or major cities across the US, LADY ALMA’s music is revered by many fans and DJs alike. As quoted by legendary dj/producer DJ Jazzy Jeff, “Oh my God...if you’re looking for some true soulful emotion, movin’ vocals...here you go...she makes me wanna throw my hands in the air & party the nite away... that’s Philly soul for ya!".