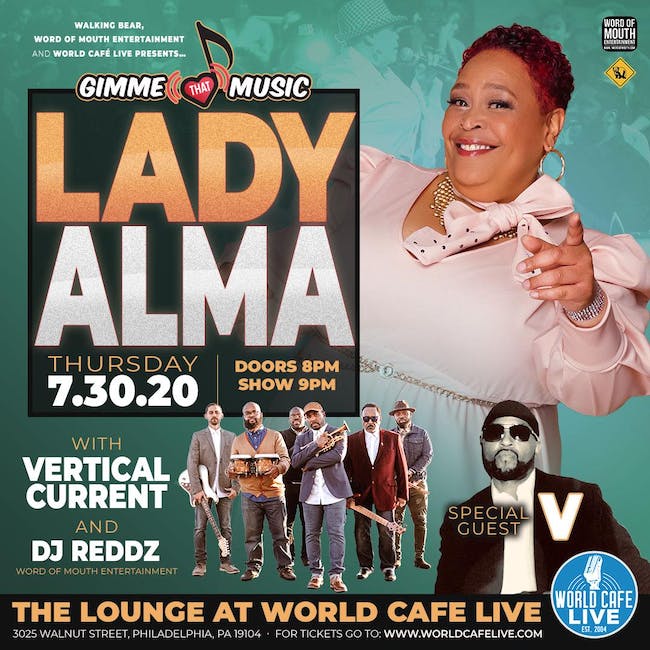 THIS EVENT HAS BEEN RESCHEDULED TO 7/30.

ALL TICKETS PURCHASED FOR THE ORIGINAL 4/30 DATE ARE VALID FOR THE NEW DATE.

With the resurgence of “Let It Fall”, which went viral via Facebook with over 20 million views (video of a fan seen dancing and lip-syncing to the song in Johannesburg, Gauteng South Africa), and thanks to another video of legendary choreographer Toni Basil, dancing to “It’s House Music”, that went viral with over 5 million views on Twitter, and was also seen on Inside Edition; it is clear - LADY ALMA is in-demand! Her single “Glory & Honor” (produced by Darryl James) was released in March 2018, and quickly followed by “A Time And A Place” with producer/DJ Ralf GUM, which was released in June 2018 on GOGO Music. Also in 2018, LADY ALMA was recognized by Traxsource as “Best of 2018” including: “2 Top 10s”, “16 Top 100 spins” and “60 features in DJ Top 10 Charts” to name a few.

Currently, LADY ALMA has released her highly anticipated anthology album entitled Twilight (June 28, 2019), with longtime collaborator Mark de Clive-Lowe, via Mashibeats. The album is now available on all streaming platforms. Following the release of her current project, LADY ALMA can be heard on the hottest tracks this year, including: Low Steppa’s “Make You Move”, which reached #1 on Traxsource; Dego’s (2000Black) third album "Too Much", on song entitled: "Just Leave It"; Valvin V. Roane’s “Just Call”; and the revered and anthemic “Let It Fall” has a new remix with legend DJ Spinna (“Let It Fall” Galactic Soul Remix), available on Moulton Music fall 2019.

Whether you’re in Toronto, Japan, Berlin, London, Paris, Johannesburg, or major cities across the US, LADY ALMA’s music is revered by many fans and DJs alike. As quoted by legendary dj/producer DJ Jazzy Jeff, “Oh my God...if you’re looking for some true soulful emotion, movin’ vocals...here you go...she makes me wanna throw my hands in the air & party the nite away... that’s Philly soul for ya!"

Being in love with music her whole life, DJ Reddz officially joined the entertainment scene in 2009. DJ Reddz' love for music goes beyond the spectrum of mixing tunes.

Word of Mouth Entertainment, LLC. which was formed by DJ Reddz in 2013, is a full service entertainment company. As a mixer and event planner, she has found plenty of ways to express herself musically. DJ Reddz is a purveyor of all styles of music, but her passions are deep, soulful House music, old school & throwback Hip Hop and eclectic soulful R&B. Over the years, DJ Reddz has worked with a broad spectrum of artists & DJ’s in Philadelphia, New Jersey and New York City as well as having played internationally in Ibiza. DJ Reddz is currently the NJ Chapter Rep for the Worldwide DJ Network, producer of House at the Lake (by Mojo & DJ Reddz) and Sisters of the Leaf cigar events DJ along with a rotation of private and corporate events. DJ Reddz’

personal motto is “Knowing your music is 95% of being a successful DJ in this business..” Remember, the right or wrong DJ or music can make or break any event!

Releasing his classic alternative R&B album 'The Revelation Is Now Televised' on BBE back in 2005, V has worked with such luminaries as Justin Timberlake, Musiq Soulchild and Will Smith over the course of his long career in music.