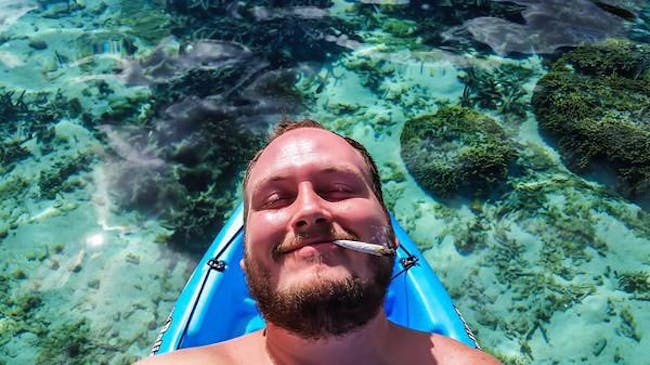 Junior Marvin, lead guitarist of Bob Marley & The Wailers was quoted about Josh Heinrichs, saying “Josh is one of those guys who comes along and fills his music with such an inspiration and with such energy that it translates so easily and positively to anyone hearing it. He is a rare talent in both his ability to craft a song with a certain timeless quality to it, and then, man, his voice, well, I mean, damn, the kid can sing as good as anyone out there; a bright future – that one.”

Josh Heinrichs is a stalwart in the American and worldwide reggae community. Beginning his own reggae band, Jah Roots, in Springfield, Missouri in 2001 as well as forming his own record label, GanJah Records with his wife, Kaytee. Josh wrote and recorded 5 albums with his former band, Jah Roots, and gained a loyal independent following via Myspace and a tireless touring schedule from 2005-2009.

Since leaving Jah Roots in 2009 to pursue a solo career, Josh has released a #1 Billboard Reggae album(Good Vibes 2016) & several other Billboard top 10 debuting albums. As a solo artist, Josh has toured the entire USA coast to coast multiple times & has been a part of many tours & has shared the stage with many headline acts including Bob Marley's children (Ziggy, Stephen & Damian), Rebelution, Ben Harper, SOJA, The Wailers, 311, Slightly Stoopid and many more. Josh has also made numerous appearances at music festivals all over the USA, Guam & Hawaii including 4 appearances at the largest Reggae festival in USA, California Roots, where in 2016 he also filmed his first live concert video which can be seen on youtube. Josh has also performed for the island nations of Hawaii & Guam multiple times to thousands of screaming fans singing along to every word. With all these accolades, years of touring and constantly promoting positive Reggae music through out the world, Josh's form of Reggae music and message remain a constant driving force behind the current reggae scene, worldwide.

Eureka Sound brings heavy vibrations of Roots Reggae and flavors of Jazz to bring Powerful message of consciousness and love.