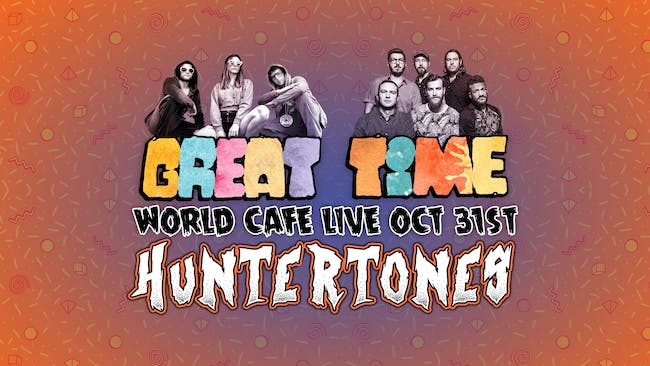 Huntertones brings people together around the globe with fun, imaginative and fearless music. Their high energy, horn-driven sound features genre bending composition and unconventional covers. Every show is a social experience celebrating the joy of music.

The band formed in Columbus, Ohio and is now based in Brooklyn, NY. They’ve performed in over 20 countries worldwide and continue to tour the US and abroad. Their latest release, Passport, is a collection of songs inspired by their experiences sharing music with people from all over the world.

“Soulful, tasty and groovy. I dare you not to dance or be in a good mood during and after listening to this beautiful music” -Lionel Loueke

"Huntertones are a band propelled forward by a horn-driven focus on explosive, imaginative, and genre-defying compositions.” –PopMatters

“Honest, genuine, skillfully executed music without limitations that is uplifting and cannot be quantified.” -Jon Batiste

GREAT TIME released their debut record GREAT ALBUM in April 2018. The trio combines their eclectic musical influences with a discerning approach and a small serving of goofs; one listen front to back will have you forgetting whether you’re couch surfing or crowd surfing. At their live shows, GREAT TIME's range inspires a kaleidoscope of emotions (not to mention dance moves). Their music attracts all types of ears, and is influenced by artists that go as hard as Nirvana, as gentle as Sufjan Stevens, and as dancy as Little Dragon. After a successful Kickstarter campaign, GREAT TIME built a recording studio on a farm outside Philly, where they live and produce themselves and other bands. They plan to continue expanding their sound with a steady release of music through 2019-2020.