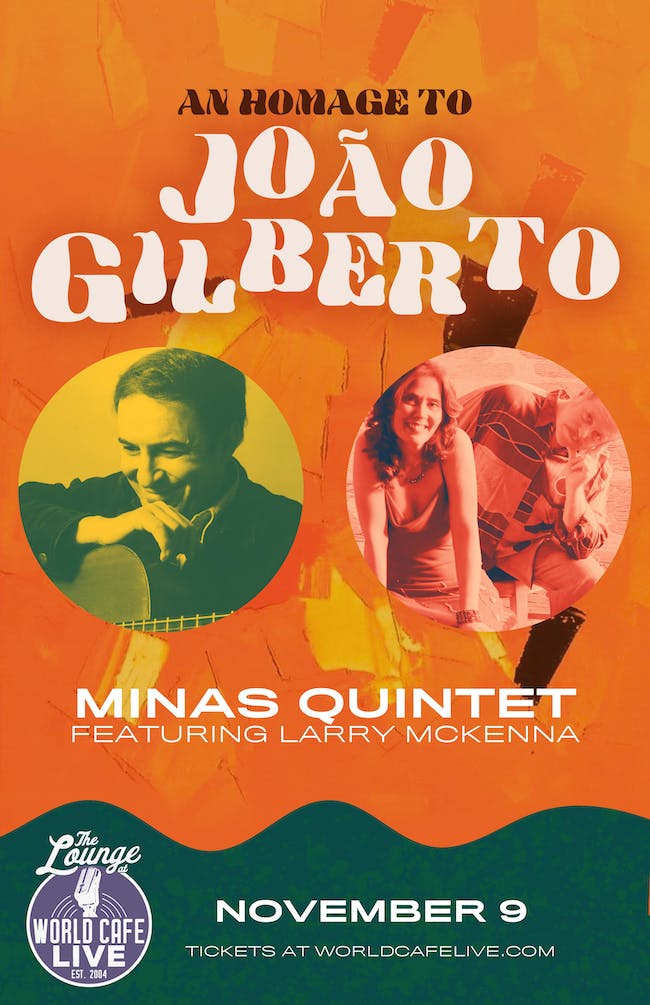 The Philadelphia-based Brazilian ensemble Minas will pay homage to the world-renowned singer/guitarist João Gilberto, who passed away this past July 6. Mr. Gilberto, along with Antonio Carlos Jobim, created Brazil’s Bossa Nova innovative sound in the early 60s. The Minas Quintet will perform Bossa Nova classics made famous by Gilberto, including his only composition for guitar - “Um Abraço No Bonfá”, and focus on the album Getz/Gilberto. Minas will feature Larry McKenna, saxophonist extraordinaire.

Orlando Haddad, Minas’ Music Director, credits João Gilberto as a major influence on his singing and guitar style. “I grew up in Brazil in the 1960s and 1970s. The Bossa Nova guitar style created by Gilberto was THE style all Brazilian musicians emulated, including stars such as Caetano Veloso, Gilberto Gil, Chico Buarque, Toquinho, among others. That was the language I grew up playing”.

As quoted directly from Wikipedia, Getz/Gilberto “won the 1965 Grammy Awards for Best Album of the Year, Best Jazz Instrumental Album - Individual or Group and Best Engineered Album, Non-Classical”. The Girl from Ipanema, the album’s opening track, also won a Grammy in 1965. “This was the first time a jazz album received Album of the Year. It was the last jazz album to win the award until Herbie Hancock's River: The Joni Letters, 43 years later in 2008 ”.

Keepers of the flame Minas moved directly from Rio de Janeiro, Brazil, to the Philadelphia Region 30 years ago. Minas has become synonymous with Brazil and Brazilian music in our area, and has performed many successful events here at World Cafe. Besides the group’s concerts, MINAS has exposed students to the music of Brazil, conducting educational programs about Brazilian culture in universities and secondary schools, reaching nearly one million.

Larry McKenna is a perfect example of a jazz musician who isn't well known nationally but is considered a master of his instrument in his home town. The majority of jazz lovers in New York or Boston may not be familiar with him, but mention McKenna’s name to many jazzmen in Philadelphia, and they'll tell you that, along with Bootsie Barnes and Jimmy Oliver, he's one of the city's best tenor sax players. After joining a high school jazz band at 14 and playing small gigs around Philly as a young adult, McKenna got his first significant break when, in 1959, he spent six months on the road as a member of Woody Herman's Big Band. McKenna was with George Young in 1962 and Al Raymond in 1970, and it was in the early 1970s that he started teaching at Temple University, West Chester University and Philadelphia Community College. Over the years, the sax-man recorded with Herman, Buddy De Franco and Dr. Bruce Klauber as a sideman and played countless local gigs as a leader, but he didn't record a CD of his own until 1997, when he provided My Shining Hour for the tiny, Pittsburgh-based Alanna Records. The late 1990s found McKenna continuing to teach at the above-mentioned colleges while playing around Philly regularly.

Indicated for 4 Grammy Awards in 2015 for the stellar album “Symphony in Bossa”, MINAS is one of the most sought-after Brazilian groups in the United States today. Their interpretations of Bossa Nova are not only authentic, but their own. Featuring Orlando Haddad and Patricia King, the husband/wife duo reflects three decades of vocal and instrumental blending. On November 9, Minas will perform as an quintet: Orlando Haddad (guitar, vocals), Patricia King (piano, vocals), Dylan Taylor (bass), Tom Cohen (drums), and featuring Larry McKenna.

In addition to performing selections from the Getz/Gilberto album in Portuguese and English, Minas will include originals from its six releases, of jazz/ Bossa Nova nature. The group’s recordings are available on iTunes, Amazon, CD Baby, Spotify, Pandora, and on www.minasmusic.com