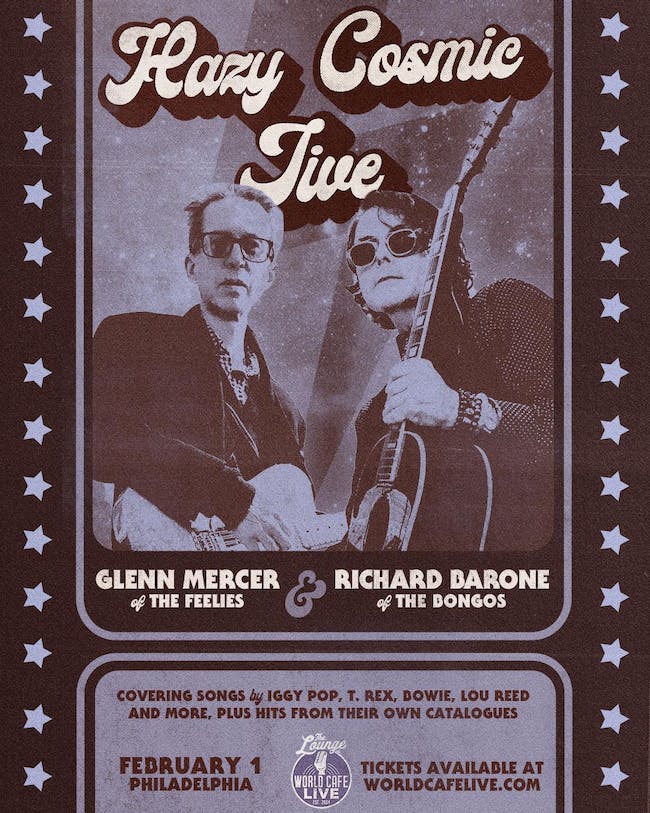 A rare duo performance of Richard Barone of the Bongos and Glenn Mercer of the Feelies, joining forces for a curated set of music from the post-Velvet Underground universe of the mid-1970s — a particularly fertile period of rock experimentation. Barone and Mercer will be exploring songs by David Bowie, Brian Eno, Roxy Music, Lou Reed, Iggy Pop, T.Rex and others, along with songs from their own Bongos and Feelies catalogues. They will be joined by Feelies percussionist Dave Weckerman, bassist Bob Torsello, and special guests

Richard Barone is an acclaimed recording artist, performer, producer, and author. Since pioneering the indie rock scene in Hoboken, NJ as frontman for The Bongos and then helping to launch the chamber pop movement with his solo debut “cool blue halo”, Barone has produced countless studio recordings and worked with artists in every musical genre. Collaborators have included Tony Visconti, Beach Boy Al Jardine, Sean Lennon, Dion, John Sebastian, Alejandro Escovedo, Donovan, Moby, the late Lou Reed, and American folk icon Pete Seeger. He has scored shows and staged all-star concert events at such venues as Carnegie Hall, the Hollywood Bowl, and New York’s Central Park. His memoir Frontman: Surviving The Rock Star Myth was published by Hal Leonard Books. His latest album, “Sorrows & Promises”, is a celebration of the early 1960s music scene in Greenwich Village NYC, where Barone lives. He is affiliated with the Clive Davis Institute of Recorded Music at New York University and The New School University of Jazz & Contemporary Music, serves on the Board of Governors of The Recording Academy (GRAMMYs) and on the Board of Advisors of Anthology Film Archives.

Glenn Mercer started on his musical path playing bass guitar with friends in various neighborhood bands. While studying art in college, he switched to guitar and helped form the “Out Kids,” with fellow Feelie Dave Weckerman on drums. Playing covers of semi-obscure garage bands from the 60’s; they soon began writing original material and playing shows in NYC. Bill Million was soon brought in as a replacement for the original bassist player. When the Out Kids broke-up, Glenn, Dave and Bill decided to stay together; Glenn took over lead vocals and Bill switched to 2nd guitar, and they chose the name “the Feelies.” They released three records in the 80’s (including the classic Crazy Rhythms), before disbanding. Glenn and Dave soon formed the band Wake Ooloo that put out three albums in the ‘90's. Glenn also began playing with other locals such as Sunburst and East of Venus, then put out Wheels In Motion. In 2008, he reunited with the Feelies for ongoing live performances, and released Here Before in 2011. The Feelies have continued performing at strategic intervals ever since. Their cover of "Paint It Black" appears in the latest Jonathan Demme movie, Ricki and the Flash.