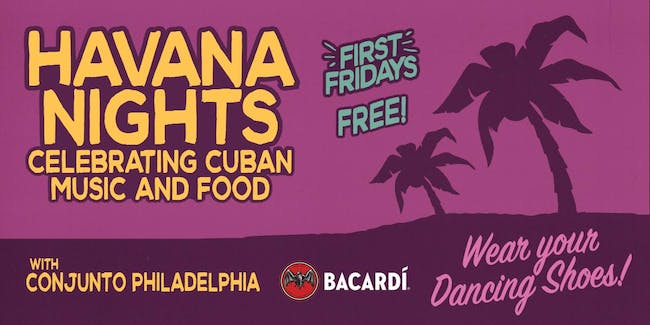 Join us for our monthly Cuban music & food series, which features authentic Cuban cuisine, cocktails, and music courtesy of Philly's most exciting Cuban band, Conjunto! The night is FREE to attend w/ a variety of food and drink specials. A perfect date night or just a night out with friends.

Conjunto Philadelphia performs music of pre-Revolutionary Cuba, including the Son, Cha-Cha-Chá and Bolero. The group's main aspiration is to pay homage to Cuba's deep and treasured musical history as well as infuse a new energy and fresh interpretation into the music. The group was founded in 2010 by Jeff Torchon as a way to recreate the incredible music he heard on the Buena Vista Social Club album and documentary.

Conjunto Philadelphia performs widely across the Philadelphia area, including the Philadelphia Museum of Art, Longwood Gardens, Chris’ Jazz Café, World Café Live, the Exit Zero Jazz Festival, the Philadelphia Center City Jazz Festival, Temple University, and the Penn Museum. They are the featured act at a monthly event called Havana Nights, hosted by World Café Live, where they bring the community together to share in Cuban music, food, drinks and dancing. The band has also given school workshops and performed at numerous private events in the mid-Atlantic US. The band’s self-titled inaugural recording was released in 2019 and showcases the band’s vast array of talent and versatility.