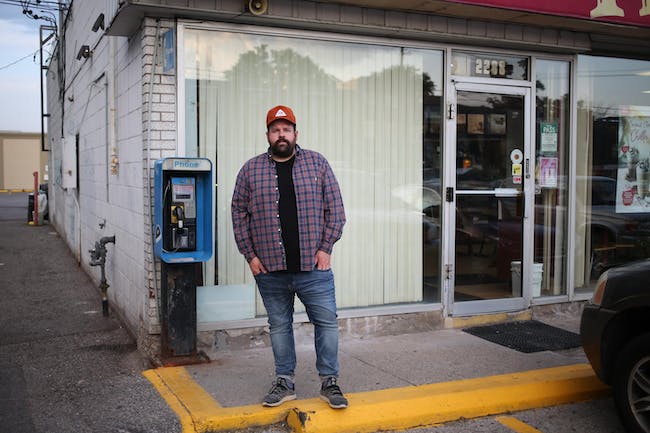 Donovan Woods and The Opposition {CANCELLED}

In 2019, a decade into his recording career, Donovan Woods pulled back the curtain on both sides of his artistry. He went unplugged for The Other Way, an acoustic and nuanced reimagining of 2018’s Both Ways that captured the Canadian artist in miniature and at his most vulnerable. Cutting right to the bone of his intimate songwriting and spectral vocals, the album showcased why Woods has become an in-demand songwriter across folk and country music, nimble enough to collaborate with both vanguard artists (Tim McGraw, Lori McKenna) and rising ones (Tenille Townes, Katie Pruitt). Released on Woods’ Meant Well label, Both Ways finally scored Woods a Juno Award (contemporary roots album) after a handful of previous nominations for songwriter of the year, along with a Canadian Country Music Award (roots album). Woods followed up The Other Way with a series of songs that added even more color to his palette. Pulsing with an electro-acoustic heartbeat, “Way Way Back” paid homage to the long shadow that old lovers often cast and the ways they creep back into our memories. “While All the While,” co-written with ace singer-songwriter McKenna, was a portrait of quotidian life that swelled into a poignant meditation on how we sit with and reconcile our conflicted feelings. Perhaps without even knowing it, Woods has explored that feeling with quiet grace throughout his celebrated career, starting with his 2009 debut, The Hold Up. To date, his work has been recorded by McGraw (“Portland, Maine”), Lady Antebellum’s Charles Kelley (“Leaving Nashville”) and Billy Currington (“Sweet Love”), while racking up over 200 million streams. On his latest song, “Grew Apart” (released on March 6), Woods lays bare yet again his penchant for showing us the soft underbelly of love’s vagaries. “ ‘Grew Apart’ is about all the things we tell ourselves a breakup is about when perhaps the truth is just that the two people didn't like each other enough,” Woods says. “I think men tend to speak about breakups in this way so their pride doesn’t get wounded, when in truth, they’re hurting. When I wrote the song, I liked it, but I didn’t think I could sing it,” he adds. “I loved to sing it, and even though it didn’t feel like it was about me, I know the guy in this song, I know what he’s trying to say.” Audiences tend to feel the same way about Woods’ songwriting. They might not know the characters, but Woods paints his themes – of heartache and joy, connection and redemption – in such vivid hues that we all see ourselves in his narratives.

Emily Brimlow is a pop-soul singer-songwriter, playing by her own set of industry rules. Known for her whimsical, ‘beachy’ vocal stylings and unique blend of world music and R&B, the Canadian-born singer pairs her wide spectrum of life experiences and diverse story-telling sensibilities to deliver such anthems as “Hope” and “Calling Me Home,” the debut singles from her string of new releases. With over 6 million streams under her belt, Emily has proven to be a force to be reckoned with in this new wave of young, genre-bending, independent artists seeking to break beyond industry limitations. Ambitious in her pursuit to ensure each song is fresh and slightly different from the last, Emily draws inspiration from the present day while still leaning on her music roots.