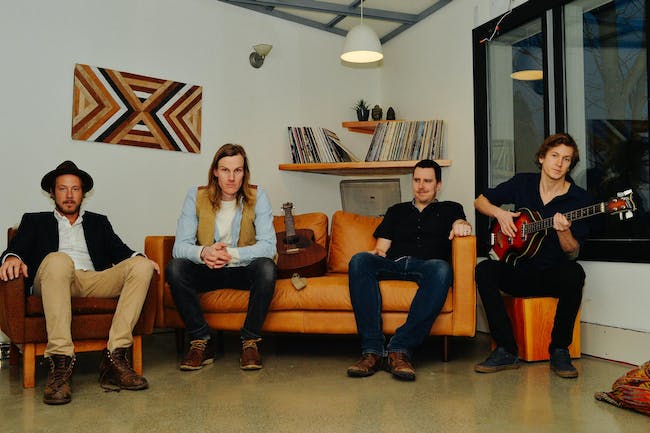 Every song has a story. With Current Swell’s third Nettwerk Records release, When To Talk And When To Listen, these stories cut deep.

Grammy-winning producer Jacquire King (Kings of Leon, Tom Waits, Norah Jones, Cold War Kids, Of Monsters and Men, James Bay) produced the album over four weeks in two vastly different locales: Nashville and Vancouver. The former is where King lives and does most of his studio work; the latter is a ferry ride away from where Current Swell makes its home. Both cities have music at their core, which gave King and Current Swell common ground on which to build their new relationship.

Yet, tensions ran high early on. During the first night at Nashville’s famed Blackbird Studios, King cut short the sessions and told the band to come back when they had something worthwhile to say. Current Swell was talking loud and saying nothing.

A blunt, band-only meeting quickly cured what ailed them. They went back to their first-ever phone call with King months earlier, when they discovered he had an extensive list of questions and ideas for each song – long before they had ever even met.

The four friends returned the following day ready to create. “He said we had finally tapped into that spark he heard in the very first demos we sent him,” recalls frontman Scott Stanton. “It helped create trust. He knew as much about the songs as we did. He pushed us because he knew we had it in us to make a really great record.”

Like all good rock ‘n’ roll should, When To Talk And When To Listen touches on all facets of the human condition, from the heartbreak and spurned love of first single “It Ain’t Right” to a pair of songs about loss that form the emotional core of the album.

"Marsha" is about the inner dialogue Stanton often has with his mother, a piano teacher who died at 46 of breast cancer when he was in Grade 9. "She is still part of me in a way, so I often talk to her when I need advice,” he says. "I feel like my mom would be really proud of it.”

Band member Dave Lang wrote title track “When To Talk And When To Listen” when his father-in-law was nearing the end of his life. Lang and his wife were getting ready to welcome their first child around the same time, which felt like a cruel twist of fate. After taking stock of the reality he was facing, Lang says the words came pouring out.

"We knew he wasn't going to be around when our daughter was born, and he was going to miss out on meeting her. And I started thinking: 'What if that happened to me? What would I want to pass along?'"

Current Swell's track record in its home country includes two No. 1 singles on iTunes Canada’s rock chart and a Top 10 record on the commercial rock charts in Canada for 2014’s Ulysses. But all signs point to When To Talk And When To Listen – an album of rich songwriting and vibrant musicianship – casting a much wider net.

That means more pressure will exist. Which is why this album has to be unlike any Current Swell recording to date.

"For Ulysses, we jammed all the songs, went in the studio and played them," Stanton says. "For this, we started from scratch. We dissected everything. Out of any album we've done, this one really captured what I was hearing in my head."

“It Ain’t Right” is an apt example. Stanton infuses the album’s lead single with a keen eye for relationship details, the band rumbling away beneath him as it reaches an apex. “I thought you were different,” Stanton sings, highlighting the narrator’s serious interconnectivity issues. “I thought you were cool, but it ain’t right.”

The group as whole found a new level of confidence on the recording. Some of that can be credited to King, who pushed Current Swell to find a new side of their artistic selves, Stanton says. “He would never say

something just to say it. But he always wound up being right. He was like a coach."

A solid fanbase has taken the group across North America several times and into countries such as Brazil, where a pair of headline tours brought them to thousands of rabid fans. "We're very comfortable in certain parts of the world with our success," Lang says. "But I know this record is one that can take us to new places."

Stanton and Lang use one word - educational - to describe the process of recording seperately at Blackbird in Nashville and the Warehouse in Vancouver. They are studios with rich histories - not to mention a client list that includes Bruce Springsteen, Red Hot Chili Peppers, AC/DC, Taylor Swift and R.E.M.

Current Swell had developed a comfortable way of recording until King came along. He succeeded in propelling them to greater heights, pushing the band to realize its potential. Urging them to dig deeper.

Now, it is time for Current Swell to push back. Lang says the group will take its music to the world this year, showcasing the heart and soul it took to create When To Talk And When To Listen.

"Anyone can make an album," he said. "But we knew this record had to be good."

Never one to shy away from speaking her mind, Laura Mina Mitic will always be the last one to tell you about herself. Instead you’ll hear about music, band mates, politics, touring and a deep reverence for humanity and the earth. You’ll hear the same on Carmanah’s first national release ‘Speak In Rhythms’, a modern eleven-song album that overflows with emotion, afterhours cool, groove and tantalizing hints of gritty vintage flavours that influence it’s modern sound.

It was during the six-week sessions that made up the bulk of the recording at Vancouver’s Warehouse Studios that producer Gus Van Go coined the band’s sound ‘West Coast Soul’. Having produced The Arkells, Sam Roberts, Fast Romantics, Wintersleep, Whitehorse and more, Gus along with co-producer Werner F set about showcasing Laura’s soulful lead vocals with a complement of strong harmonies, rich acoustic layers, multiple lead instrumentation all powered by a deft and driving rhythm. The result is a soundtrack that shimmers, dark and brooding at times and shining boldly in others, with lyrics that rival many of the great songwriters of our generation.

At home on Vancouver Island, Carmanah have built a large and enthused fanbase, selling out bigger venues and opening stages for international acts like Ziggy Marley, Clinton Fearon, K.D. Lang, Moby and Shakey Graves. Off the island, on their travels both near and far, and consistent with their values, the band lessens their ecological footprint by fuelling their tour vehicle with used vegetable oil procured from restaurants along the way.

Carmanah was mentioned as a “BC musician to watch out for” by Vancouver’s Daily Hive. The Zone 91.3’s Jon Williams has called her, “the Stevie Nicks of our generation.” Times-Colonist reviewer Mike Devlin touted her opening act for K.D. Lang as a, “solid six-song set highlighted by some impressive vocal runs and nifty acoustic guitar work.”

So, when presented with the opportunity, join in and be part of the experience. This is the beginning of a long journey, one that seeks to create a soundtrack for a new listener. This is music, this is love.

Deconstructing and reimagining familiar themes, both lyrically and in composition, songwriter and multi-instrumentalist Jesse Gimbel proves that convention is only a restriction when it is left unexamined.

Sometimes a whisper, sometimes a hammer -- but never out of place, Jesse blends narrative and musical elements into a tonic of rhythm and melody which reveal their truths to each listener in a personal way.

Drawing lines of similarity to Death Cab for Cutie, the Decemberists, Elliott Smith, Sonic Youth and Wye Oak, fans of a rich, real, relatable cinematic pop will quickly connect with Jesse’s music. Through his experience as a producer and engineer, Jesse is fully immersed in his craft, continually refining his deep knowledge in the tools of his trade.