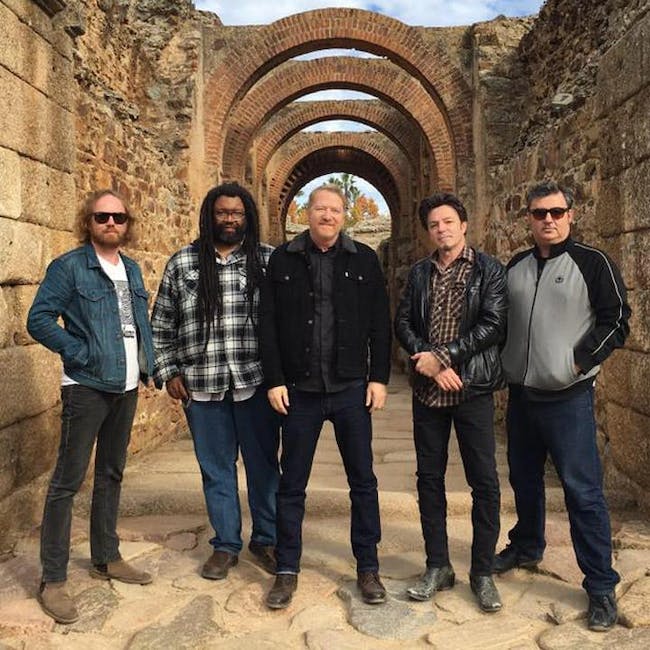 Despite being less than a five-hour drive from city to city, musically, these two regions couldn't be further apart from one another. In the late '70s and '80s a harder-edged style of rock music emerged from the Bay area, while Bakersfield is renowned for its own iconic twangy country music popularized, most famously, by Buck Owens and Merle Haggard in the '60s and '70s. Yet despite these differences, they are both elements that Cracker's two cofounders, David Lowery and Johnny Hickman, have embraced to some degree on nearly every one of their studio albums over the last two decades. On Berkeley To Bakersfield, however, instead of integrating these two genres together within one disc, they've neatly compartmentalized them onto their own respective regionally-titled LPs.

As Lowery explains, "On the Berkeley disc the band is the original Cracker lineup -- Davey Faragher, Michael Urbano, Johnny and myself. This is the first time this lineup has recorded together in almost 20 years. We began recording this album at East Bay Recorders in Berkeley, CA. For this reason we chose to stylistically focus this disc on the music we most associate with the East Bay: Punk and Garage with some funky undertones. To further match our sense of place we often took an overtly political tone in the lyrics."

"This Bakersfield disc represents the 'California country' side of the band. Throughout the band's 24-year history we've dabbled in Country and Americana but this time we wanted to pay homage to the particular strain of Country and Country-Rock music that emerges from the inland valleys of California."

Cracker has been described as a lot of things over the years: alt-rock, Americana, insurgent-country, and have even had the terms punk and classic-rock thrown at them. But more than anything Cracker are survivors. Cofounders Lowery and Hickman have been at it for a quarter of a century -- amassing ten studio albums, multiple gold records, thousands of live performances, hit songs that are still in current radio rotation around the globe ("Low," "Euro-Trash Girl," "Get Off This" and "Turn On, Tune In, Drop Out With Me" to name just a few), and a worldwide fan base -- that despite the major sea-changes within the music industry -- continues to grow each year.

We didn't want to jump right back in and make that 'Bad Reunion Record' that most bands make when they try to reform. We were more concerned with getting used to each other and figuring out that we could still make music together, before we made a big deal out of announcing that we were back."

In the second half of the 1980s, Camper Van Beethoven-David Lowery (vocals, guitar), Victor Krummenacher (bass, vocals), Greg Lisher (guitar), Jonathan Segel (violin, guitar, keyboards) and Chris Pedersen (drums), plus late addition David Immerglück (guitar and various stringed instruments) -- was one of its era's most original and influential indie rock bands. The quintet effortlessly combined an iconoclastic, irony-laced lyrical stance with a free-spirited eclecticism that encompassed a dizzying array of stylistic influences, from punk to folk to psychedelia to all manner of world music. Camper's visionary embrace of disparate genres established them as innovators, while their songs' combination of barbed satire and poignant humanism stymied those who'd attempt to pigeonhole them as a mere novelty.

The qualities that originally made Camper Van Beethoven such a significant force are prominent on New Roman Times, from the modified arena-rock of "White Fluffy Clouds" to the country-psychedelia "That Gum You Like is Back in Style" to the smooth Balkan ska of "Might Makes Right" to the jittery hoedown of "Militia Song" to the airy country balladry of "New Roman Times" to the dirge-like psychedelia of "The Long Plastic Hallway" to the Tex-Mex lilt of "Los Tigres Traficantes" to the widescreen '70s-cop-show-funk of "Civil Disobedience" to the apocalyptic danceability of "Discotheque CVB."

New Roman Times is perhaps Camper Van Beethoven's most musically accomplished and conceptually ambitious effort to date. The album -- on the band's own Pitch-A-Tent label, the same imprint that issued much of Camper's seminal '80s work -- is a vivid, emotion-charged song cycle that merges the group's sense of musical adventure with a fanciful rock-opera storyline that's rife with parallels to America's current political landscape.