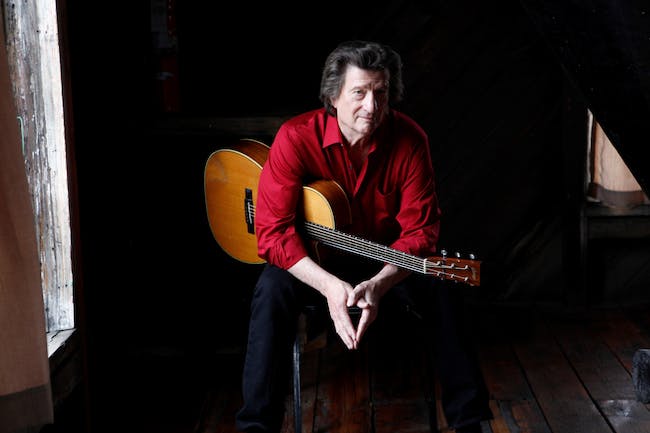 ALL TICKETS PURCHASED FOR THE ORIGINAL DATE(S) WILL BE HONORED FOR THE NEW DATE.

CALL ME LUCKY is the new record from Chris Smither and is his first set of brand new originals in six years (release date: March 2018 on Signature Sounds/Mighty Albert). Recorded at the gorgeous Blue Rock Studio in the Texas foothills CALL ME LUCKY features longtime producer and multi instrumentalist David Goodrich, drummer Billy Conway (Morphine), Matt Lorenz (aka The Suitcase Junket), Mike Meadows, and engineer Keith Gary. The new record features Smither trademark songs that offer commentary on the human condition with a wink of an eye and pulls from deep in the soul. To complete the project are a couple of surprise covers that remind us of Chris' deftness as a song interpreter as he makes the songs his own.

Honing a synthesis of folk and blues for 50 years, Smither is truly an American original. Reviewers and fans from around the world, including Rolling Stone and The New York Times, agree that Chris continues to be a profound songwriter, a blistering guitarist, and intense performer as he draws deeply from the blues, American folk music, modern poets and humanist philosophers.

CALL ME LUCKY does just that. Check it out. Check out Chris Smither.

Zak Trojano is a songwriter and multi-instrumentalist, a finger-style guitar player, a fly-fisherman, and a beer drinker. He watches more than he talks, the guy at the end of the bar nursing a drink while the afternoon light angles in, letting the conversation pile up around him like snowfall. He grew up in New Hampshire, outside of town in a cabin built by his parents.

His father was a drummer who held down a regular country gig, and nights after work he would loosen his tie and show his son the finer points of Ginger Baker and Elvin Jones. In New Hampshire they drove around in trucks, and Prine and Dylan cassettes showed up in most of those trucks. Zak made Eagle Scout, got his knots down. Then it was college and out, wandering the country from the desert Southwest to Great Plains until he ran out of money, washing windows to work up the bus fare home. After a while it seemed like he ought to write some songs, and he did: heavy songs with a light touch; an AM radio throwback voice and an intricate finger-style technique framed by a drummer’s rhythm.

Since then, Trojano has found a variety of outlets for his diverse musical interests: co-founding the much acclaimed folk trio Rusty Belle in 2006, appearing on records by Chris Smither (Time Stands Still, Still on the Levee), Jeffrey Foucault (Shoot the Moon Right Between the Eyes), Peter Mulvey (Letters From a Flying Machine) and Chris Pureka (How I Learned to See in the Dark). All while touring and releasing his solo records (Two Lines, Yesterday’s Sun, I Took Molly to See the Butterflies).

In recent years, Trojano’s solo work has found the spotlight with discerning listeners everywhere. Stage by stage, in clubs, music halls, bars, and coffeehouses across the country, he has honed a live show that keeps audiences glued to the stage, like a rare conversation with an old friend who doesn’t usually say much, but plays a mean guitar.

Wolf Trees is a record with live performance at its heart. The songs were written as movements in a larger piece, with textures and themes resurfacing in longer arcs to bind the whole together. A wolf tree is a stoic figure, a passed over remnant of a distant, wilder world, where there was more space between things.

The third album from Zak Trojano, Wolf Trees is a move towards high definition from a songwriter whose pictorial lyrics are lauded by many for their vivid and cinematic imagery. While recently gaining wider recognition from audiences across the country, Trojano has been known for some time by the best in the business as a writer who, “…lights up the darkness and gives it definition.” (Chris Smither). From the very first driving notes of “Kid’s Got Heart” and early scene setting lines (the poets take it on the chin for the bells that ring right through you), Trojano draws the curtain, with able hands, on a production that provides shape and a deeper motion to the screenshot temperament of life in the modern world.

In over a decade writing, recording, and performing music professionally and sharing studios and stages with his band Rusty Belle, or supporting touring acts like Chris Smither, Kris Delmhorst, Jeffrey Foucault, and Peter Mulvey, Zak Trojano has evolved his own thing: A warm baritone supported by an old Martin guitar and low tuned Weissenborn lap steel. His complex finger style technique was born out of the country blues tradition through years of immersion in the work of players as diverse as John Fahey, Chet Atkins, and Merle Travis.

The guitar shares the spotlight on Wolf Trees, shining through simple arrangements that coalesce around Trojano’s lyrics for music that, “is made from a whole cloth, it’s from a long time ago that feels like yesterday” (Peter Mulvey). From listening to old records and the trading stories over many miles and sequestered greenrooms with greats like Smither and Foucault, Trojano has found that illusive voice that can produce a record that looks forward as much as it looks back.

It was the exploration of solo performance that led to the guiding aesthetic of Wolf Trees. Trojano opted to leave behind the lush string and horn arrangements of his last record (Yesterday’s Sun) in favor of a true solo album on which he plays and sings every note. All guitars were tuned to a low C modal tuning, and sent through various amplifiers to combine their acoustic and electric properties into a large, dark, and open sound. With the help of longtime friend and producer David Goodrich (Chris Smither, Jeffrey Foucault), and engineer Justin Pizzoferrato (Dinosaur Jr., Sonic Youth) they captured a record delicately balanced between the acoustic intimacy of a coffeehouse and the wild volume of a midnight rock club.

“Nowhere Shuffle” is a dark, minor, ballad with a halftime groove reminiscent of some lost 70’s acoustic Pink Floyd album; an oblique commentary on the modern addiction to electronic devices (Bowed heads and praying hands/nowhere with everyone at once) through the eyes of someone witnessing a Zombie apocalypse. The playful introspection of “My Room” deals with the ups and downs of solitude, the vacillation of the hermitic spirit between feeling safe and feeling alone (I’ll be fine here in my room while the roses bloom outside/how come they never come to me unless they’re cut down in their prime? I’ll bide my time).

“Everyone Knows You” is epic by nature. A telescopic view of a world where everybody is famous and the worst among us have risen to the top. It’s a rock anthem with an unusual form propelled by a rising vibrato and half-smiling social commentary (It’s the march of the egg man/boiled and white/pale as a junkie at noon watch him roll). The title track is a reconciliation of dreams with reality; an adventurous melody that holds the listener through the trials of finding an anchor in the world (How could I begin to tell you how/easy it would be to find a place for now/in the soft light of the almost dark/where the wolf trees howl through the park for you).

On Wolf Trees, Trojano has woven nine songs into an album that’s very form calls attention to the thin rapidity of modern life. Like admiring the forest view from atop a white pine cell tower, or losing yourself in the colors of a flat-screen sunset, Wolf Trees dares us to hold tight to current beauty while we remember a different time.