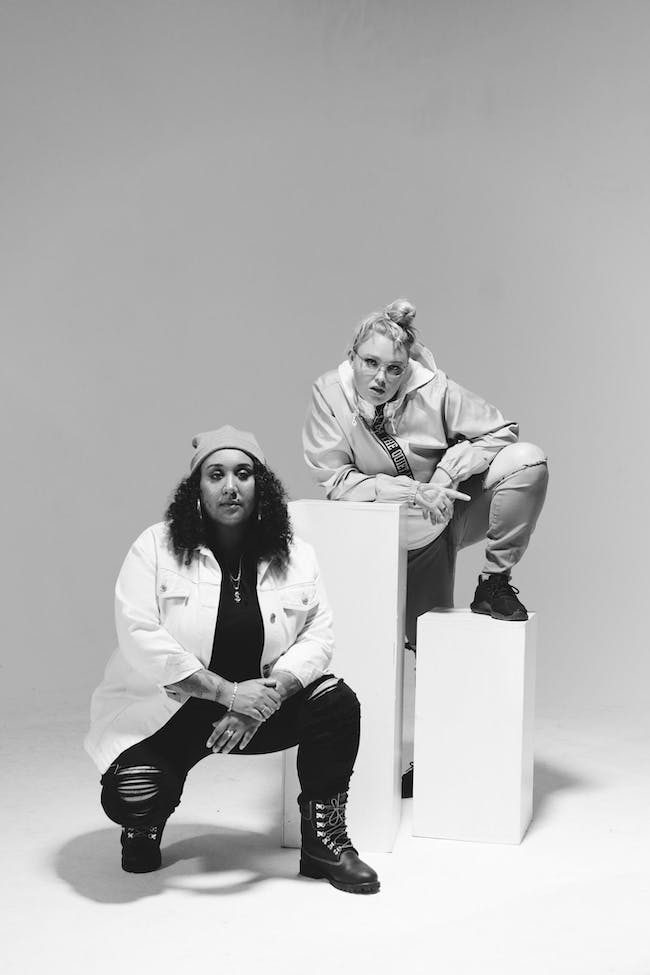 Gabrielle "Gifted Gab" Kadushin was born and raised in Seattle, WA's Central District. Growing up in the church and singing in the choir, she was composing melodies and playing instruments at a young age. As well as music. Freestyle rapping in elementary school turned into Gab professionally showcasing her skills in major venues and festivals across the US. She's opened for legends such as DJ Quik, Rakim & Slick Rick as well as write ups in major publications like XXL, VH1, Dope & TIME magazine. In 2016, she curated & headlined her own 8 city tour. Gab’s latest video gained viral attention. “Come Correct” The collaboration with San Francisco’s Blimes Brixton has gained 10 million views across platforms & counting.

From the heart of San Francisco, Blimes Brixton is an MC and vocalist armed with an unmatched passion for artistry. Her musical background extends two generations to a blues musician father and jazz musician grandfather which could justify her keen attention to musicality. Her distinctive voice is globally appreciated; early on in her career, the lyricist joined the likes of Too Short, Adam Vida, & France’s Scratch Bandits Crew on various releases and co-headlined a 25 city European tour with LA rapper Gavlyn. Most recently, Blimes' undeniable talent and unique history as a battle rapper sparked collaborative efforts from hip-hop icon Method Man on their release of “Hot Damn” Blimes’ latest videos have gained viral attention. “Come Correct” the collaboration with Seattle’s Gifted Gab has gained 10 million views across platforms & counting. In 2016, Blimes established her own imprint label, Peach House Records, which is focused on highlighting talented women in the industry. Now in 2018, Blimes gears up to release a full length solo album Castles.

Not one to wait for a musician to make her magic happen, Jacqueline also produces some of her own material. Armed with just a mic, her digital sampling, foot pedal and a small mixer, Jacqueline turns breaths, sighs and words into funky orchestral pastures for her lyrics to frolic through.

"This is Nu-Soul"- TC Helicon official facebook page. Philly based singer/songwriter, Jacqueline Constance blends her R&B and Hip Hop command into a swirling emotional stew. With a warm, yet strident voice she creates daring and fiery stories in sound.

Born and raised in Philadelphia, Jacqueline is inspired by jazz legend Ella Fitzgerald, which is apparent in her vocal nuances and soulful timbre. Her songs speak to those who are creating their own lane by adding lasting melodies to their own life story. Garnering the attention from acts such as Bj the Chicago Kid, Phonte and Zo from The Foreign Exchange, Questlove, Anderson Paak, St Beauty, Earl St Clair and many others, she has created a pathway for herself unlike anything that has been seen or heard before.