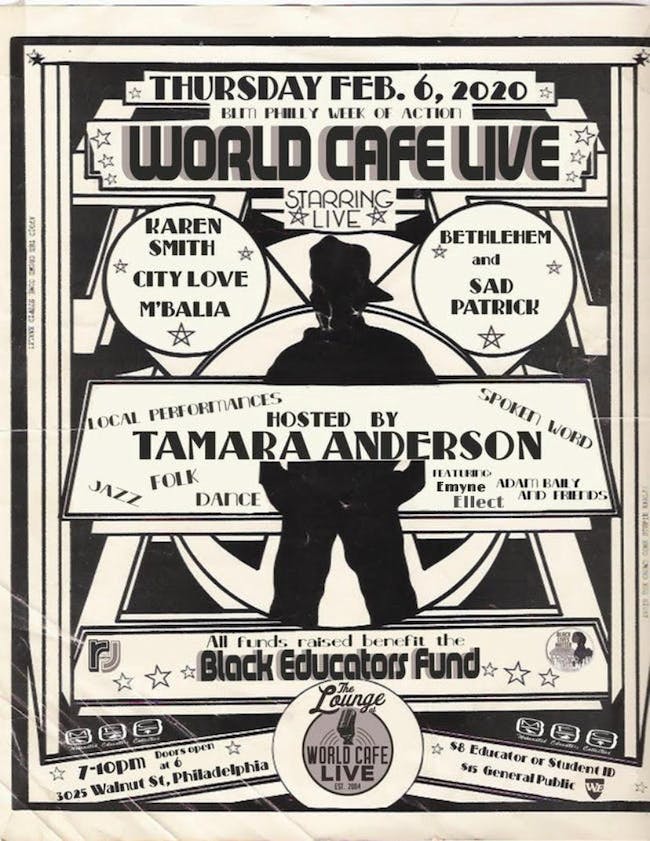 In the fall of 2016, a group of educators in Seattle staged a Black Lives Matter Action in response to an incident that occurred at one of their local schools. Hundreds of teachers brought light to a racial incident by wearing Black Lives Matter shirts in solidarity with the students who were affected. The Caucus of Working Educators Racial Justice Organizing committee was inspired by this work and sat down to figure out what a similar action could look like in Philadelphia. We decided it should last a week and that it should be centered on the 13 guiding principles developed by the original organizers of Black Lives Matter. It was also vital that the week should feel inclusive and not just limited to schools or educational settings/issues. We wanted this to be a partnership with the Philadelphia community of parents and organizers that are often ignored when it comes to issues of public education, hence the name Black Lives Matter Week of Action.

This concert will feature African American performing artists in a celebration of Black Joy and Activism in Philadelphia. It is an opportunity to celebrate what public education truly means for Philly youth, families, and communities.

Proceeds of the ticket sales will go to the Black Educators Fund (co-sponsored by Black Lives Matter Philly and the Melanated Educators Collective), which is raising money to pay the out of pocket expenses teachers incur during the school year, provide resources to help educators decolonize their syllabuses, and make their classrooms accessible for students with disabilities.

Every year Philadelphia’s community of Black educators shrinks (Only 25% of the teaching force are Educators of Color), while our policymakers and elected officials fail to offer tangible solutions to this worsening problem. We know, Black teachers make a significant impact on the education of all students, but are particularly crucial to the education AND success of Black students, who have been historically underserved by America’s public education system.